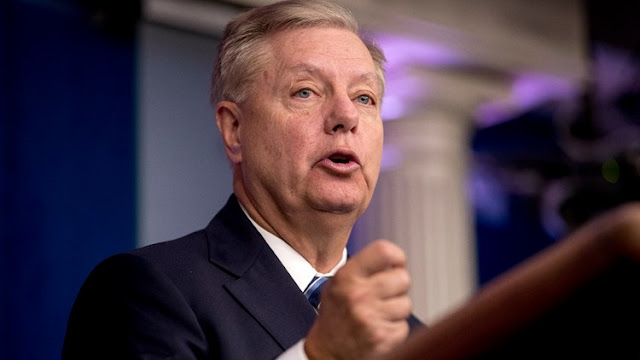 Sen. Lindsey Graham (R-S.C.), one of President Trump’s closest allies, pushed back on Sunday against an effort to contest the results of the presidential election by GOP senators and senators-elect as an unrealistic “political dodge.”
Eleven GOP senators led by Sen. Ted Cruz (R-Texas) on Saturday said a commission should be set up to investigate the election won by President-elect Joe Biden.
They joined Sen. Josh Hawley (R-Mo.) in saying they would contest the results of the election.
“Proposing a commission at this late date – which has zero chance of becoming reality – is not effectively fighting for President Trump. It appears to be more of a political dodge than an effective remedy,” Graham tweeted Sunday along with a Fox News article about the effort by Cruz and others to set up an electoral commission to audit vote results in disputed states.
Graham tweeted that he looks forward to hearing the objections of Cruz, Sens. Ron Johnson (R-Wis.), Steve Daines (R-Mont.), Marsha Blackburn (R-Tenn.), Mike Braun (R-Ind.) and others but warned, "They will need to provide proof of the charges they are making."
In a follow-up statement circulated to the media, Graham said his colleagues will have to "provide clear and convincing evidence that the failure to act – in both the state and federal courts and the states legislatures which investigated these claims – was made in error."
He also said GOP colleagues challenging electoral votes need to show that "the failure to take corrective action in addressing election fraud changed the outcome of these states’ votes and ultimately the outcome of the election."
"They have a high bar to clear," he added.
Graham was an early ally of Trump’s questioning of electoral votes in key states and contacted Georgia Secretary of State Brad Raffensperger (R) in November to find out more information about how his state verified the authenticity of mail-in ballots.
Hawley was the first Republican senator to announce his intention to object to the electoral votes for Biden in disputed swing states. He, however, did not sign on to a letter Cruz and 10 other Republicans released Saturday calling for the formation of a special commission to audit the results of the 2020 election.
In a letter circulated Saturday, Cruz and his allies called for the appointment of a commission to conduct a 10-day emergency audit and to give individual states the opportunity to convene a special legislative session to certify or change their electoral votes.
Graham is the latest Republican senator to caution against efforts to challenge the tally of Electoral College votes on Jan. 6, when the Senate and House are scheduled to meet in a joint session.
Sen. Pat Toomey (R-Pa.), who is retiring at the end of 2022 and whose home state of Pennsylvania is one of five states facing challenges to its electoral votes, issued a strong statement on Saturday announcing his intention to oppose Cruz’s effort.
“I voted for President Trump and endorsed him for re-election. But, on Wednesday, I intend to vigorously defend our form of government by opposing this effort to disenfranchise millions of voters in my state and others,” he said.
Sen. Lisa Murkowski (R-Alaska) also issued a statement Saturday declaring she would vote to affirm the results of the 2020 election and calling on colleagues to do the same.
“I will vote to affirm the 2020 presidential election,” she said. “The courts and state legislatures have all honored their duty to hear legal allegations and have found nothing to warrant overturning the results,” she said.
“I urge my colleagues from both parties to recognize this and to join me in maintaining confidence in the Electoral College and our elections so that we ensure we have the continued trust of the American people,” she added.
National