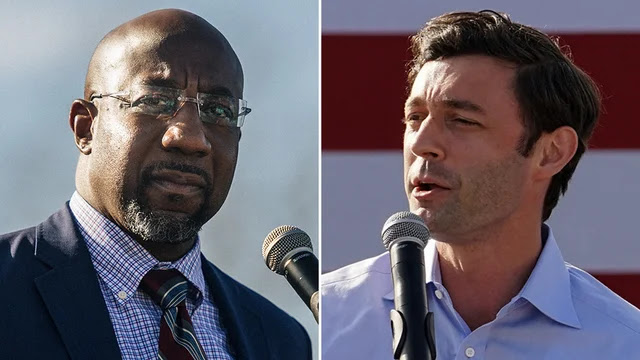 Georgia’s top election official on Tuesday certified Raphael Warnock and Jon Ossoff as the winners of two closely watched Senate runoffs, affirming a pair of Democratic victories that will effectively hand the party control of the upper chamber.
The certification of the runoff results by Georgia Secretary of State Brad Raffensperger (R) comes as Democrats prepare to take power in Washington. President-elect Joe Biden and Vice President-elect Kamala Harris are slated to be sworn in Wednesday.
Warnock ousted Sen. Kelly Loeffler (R-Ga.) in a hotly contested runoff election on Jan. 6, while Ossoff defeated former Sen. David Perdue (R-Ga.) in a simultaneous contest.
With the election results certified, Warnock and Ossoff could be sworn in to their new roles in Washington as soon as Wednesday.
Prior to the runoffs, Republicans held a 50-to-48-seat advantage in the Senate. The dual victories in Georgia, however, will allow Democrats to effectively control the chamber; in the event of a 50-50 vote, Harris will be the tie-breaker.
Georgia has long been a Republican stronghold. But it has emerged as a key battleground state as its population has grown and demographics have shifted.
In November, Biden became the first Democratic presidential candidate to carry the state in nearly three decades.
With their victories earlier this month, Warnock and Ossoff became the first Democrats in more than 20 years to win Senate contests in Georgia.
Warnock, the senior pastor at Ebenezer Baptist Church in Atlanta, will be only the second Black senator from the South since Reconstruction.
National