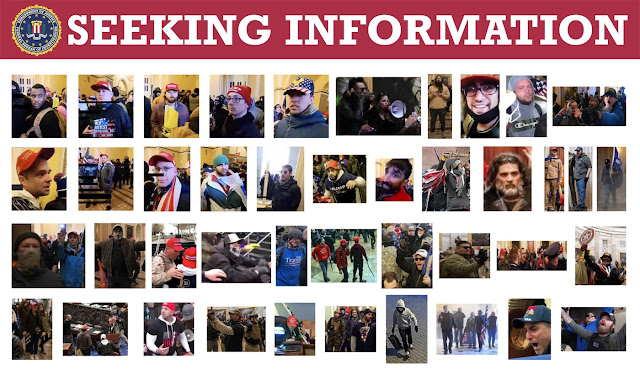 The FBI on Sunday released images of seven people suspected of beating a Washington, D.C., police officer during the Jan. 6 attack on the U.S. Capitol and of a person authorities said placed pipe bombs at the Democratic and Republican party national headquarters.
The bureau published photos of seven individuals who the FBI said are wanted in connection with the assault of D.C. Metropolitan Police Department (MPD) Officer Mike Fanone, which occurred during the pro-President Trump riots at the Capitol.
“The FBI is seeking the public’s assistance in identifying these individuals involved in the assault of DC Metropolitan Police Officer Mike Fanone,” the release accompanying the photos said.
The photos appear to show seven men in the crowd, and the FBI asked anyone who recognizes the individuals or has information to report it either over the phone or through its tip website for the riots.
The FBI also announced that it’s offering a $50,000 reward to anyone who provides “information leading to the location, arrest, and conviction of the person(s) responsible for the placement of suspected pipe bombs” near the Republican National Committee (RNC) and Democratic National Committee (DNC) headquarters on Jan. 6.
The released photos show a person in a hooded gray sweatshirt carrying a backpack and wearing a mask.
The bureau noted in a release that “multiple” law enforcement agencies were told of a suspected pipe bomb at the RNC at about 1 p.m. About 15 minutes later, reports of a second pipe bomb near the DNC headquarters came in.
The D.C. police confirmed later on Jan. 6 that the pipe bombs were found near the DNC and RNC headquarters during the afternoon.
The FBI has been working to identify those who participated in illegal activity on Jan. 6 when a pro-President Trump mob raided the Capitol building, resulting in the deaths of five people.
The rioters attempted to stop Congress from certifying President-elect Joe Biden’s Electoral College win, which lawmakers ended up doing hours after the disruption.
Fanone, an MPD narcotics officer, told CNN that during the chaos, he was pulled into a crowd and Tasered. The mob took his gear, spare ammunition, police radio and badge, and several yelled “‘Kill him with his own gun.’”
“So, the other option I thought of was to try to appeal to somebody's humanity. And I just remember yelling out that I have kids. And it seemed to work,” he told the network.
More than 60 people have been charged with crimes at the Capitol, according to the Department of Justice, including Lonnie Coffman, who was arrested only because police were investigating the pipe bombs and noticed one of the guns in his vehicle, according to court documents. Officials do not believe Coffman is responsible for the planted pipe bombs.
National