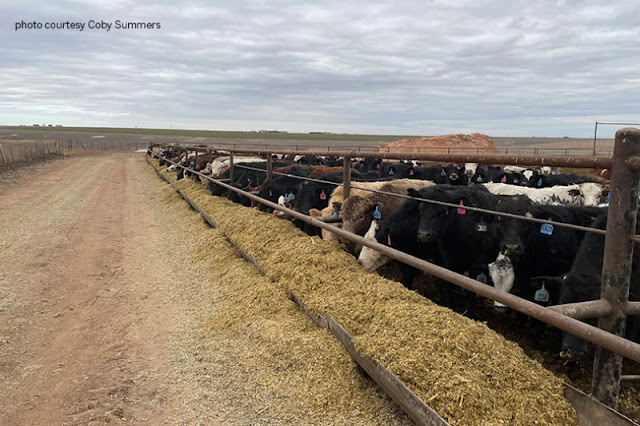 By Jennifer Dorsett
In West Texas, farmers and ranchers are used to dry conditions. But 2020 turned out to be an exceptionally bad year, forcing farmers and ranchers to make difficult planting and stocking decisions.
For cattle ranchers like Coby Summers, the past year called for a careful balancing act between maintaining herd numbers and profitability.
“We run a cow-calf and yearling operation and have a pre-conditioning yard. In our pre-conditioning yard, we receive young calves from Arkansas and eastern Oklahoma and try to get them fattened up and then turn them out on wheat to graze,” Summers said. “But this year, everything is in the yard, and we’re having to feed all of them. We normally turn out 2,000 to 3,000 head a year, but right now I only have 80 head out and just kept the rest in the yard because there’s no pasture.”
Summers had to supplementally feed his cattle throughout the vast majority of 2020. Although the feeder cattle market saw large losses last year, he said thankfully, the calf market didn’t follow. But having to buy more feed made the cost of gain higher, creating razor-thin profit margins for his pre-conditioning operation.
“We normally bring in calves that weigh around 350 to 450 pounds, straight from being weaned. Then, we grow them to about 750 pounds before selling them. But this year, because of commodity availability and roughage being so hard to find paired with the fact that we couldn’t grow any hay, we had to sell some animals at about 650 pounds, which we normally wouldn’t do,” Summers, who is a Castro County Farm Bureau board member, said. “In the past, we would turn calves out on wheat or grass and that cuts that cost of gain and leaves a little more money out there to ride the market. But by keeping them in the yard, we have to be diligent about getting them contracted, because there’s nothing to turn them out on. The margins got really tight there for a while, and we didn’t buy any calves in November and December like we usually would.”
For his cow-calf operation, more tough choices loomed as the pastures got drier. Castro County is experiencing the second-driest year to date in 127 years, according to the U.S. Drought Monitor. With a warm, dry La Niña weather pattern predicted for the winter, important decisions had to be made.
“We have three or four pastures going unused because there’s no grass, and we don’t want to hurt the land even more getting through this dry spell. So, we started slowly culling last spring, targeting the older cows and different things,” Summers said. “We thought we’d catch some summer moisture and be alright, but that didn’t happen. We culled again in the fall, this time more severely. We did have one herd we completely dispersed, because we couldn’t haul enough feed for them to make it work.”
It’s not just ranchers who are affected by the dry weather. Summers noted higher feed prices are a symptom of the drought stress farmers are experiencing, and it trickles down from there.
“Silage, corn, gluten and energy commodities have all gone up. With hay, roughage and burrs, a lot of that is dependent on the rain to grow those crops, because they’re a secondary crop for our area farmers,” he said. “Hay supplies are getting really short up here. We could kind of see it coming, so we bought a bunch of hay and forward contracted some cotton burrs. But a lot of our burrs come from the dryland crops. So, when cotton farmers don’t have good yields, we don’t get the supply we need, and prices go up at the same time.”
While he’s worried about the dry weather, in the often-repeated words of farmers and ranchers, Summers said all he can do for now is to just keep going.
“We need to sustain our operation for the next generation by letting pastures rest and doing the best we can with the cards we’re dealt. All we can do is pray and get up every morning and go to work,” he said. “And it’ll rain. It always has, just not always in our own time. I’ve never seen it not rain. It’s just a matter of when.”
Local Texas