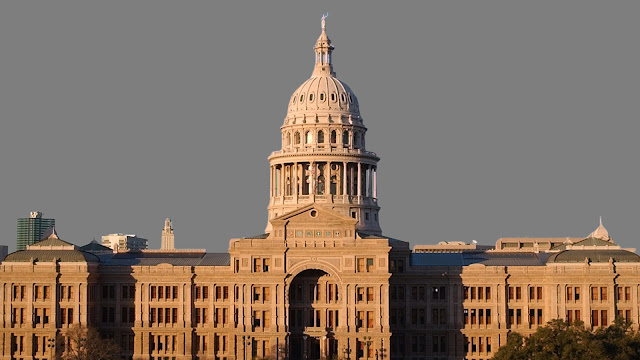 It was just a few days ago that the Texas State Capitol opened up for the new session of the Texas legislature. The top concern at that time was protecting lawmakers, staff, and visitors from the coronavirus. Now the capitol building and grounds have been closed and it has nothing to do with COVID-19. Threats of violent protests that have come into all 50 states, including Texas, caused the Texas Department of Public Safety to abruptly close the capitol Friday night.
The building and the Capitol grounds were closed due to new intelligence coming in that intensified safety concerns, causing DPS to tighten security. The building and grounds were closed due to the pandemic and also due to damage done by protesters last May and June during the Summer of Love. The closures begin today and last through Wednesday. The Texas legislature gaveled in on Tuesday to begin its work. The Texas legislature meets every two years, not annually. This is the first week of the 87th Legislature.
In a statement, DPS Director Col. Steve McCraw said that “the Texas Department of Public Safety is aware of armed protests planned at the Texas State Capitol and violent extremists who may seek to exploit constitutionally protected events. As a result, DPS has deployed additional personnel and resources to the Capitol and are working closely with the Federal Bureau of Investigation and the Austin Police Department to monitor events and to enforce the rule of law.”
Earlier this week, McCraw told state senators that authorities are monitoring multiple groups that could threaten Capitol security in coming days, but he stressed that the agency stood ready to neutralize any possible attack.
The FBI has received intelligence that there are threats in all 50 states for the days leading up to Joe Biden’s inauguration and on the day of the inauguration. Law enforcement is on heightened alert this weekend. McCraw notes that the threats are coming from groups with different ideologies. Three state senators said that the groups are between 200 and 600 in membership. The senators didn’t want to comment more than that due to the confidential nature of the information.
McCraw is confident that there are ample numbers of DPS troopers and other officers to respond to a group who might travel to Austin to protest or even begin a riot. His concern is if groups consolidate and mobilize together, causing the need for additional reinforcements. We’ve witnessed how quickly a protest can turn sideways and go bad. On the opening day of the Texas legislative session, additional security was in place at all main entrances to the building. There was a small protest on Wednesday by some Trump supporters and that protest was described as “relatively quiet”.
According to an FBI bulletin reported by national media outlets this week, nationwide protests could start at the end of this week and continue through Biden’s inauguration. Investigators believe some protesters are from extremist groups.
“While our standard practice is to not comment on specific intelligence products, the FBI is supporting our state, local, and federal law enforcement partners with maintaining public safety in the communities we serve,” the bureau said in a statement. “Our efforts are focused on identifying, investigating, and disrupting individuals that are inciting violence and engaging in criminal activity.”
DPS isn’t so concerned about peaceful protests that may happen. It is the threats of violence that are concerning. In Texas, handguns are allowed to be carried concealed or openly in the Capitol with a state-issued license to carry. McCraw notes it is likely that several lawmakers carry handguns into the building which provides an additional layer of security.
It is being reported that all 50 states are gearing up this weekend for pro-Trump marches that are scheduled at state capitals. Their National Guards are being deployed to prevent violence. Reuters reports that Michigan, Virginia, Wisconsin, Pennsylvania, and Washington have activated their National Guards.
In Michigan a fence was erected around the Capitol building in Lansing and troopers were mobilized from across the state to bolster security. The legislature nevertheless canceled meetings next week, citing concern over credible threats.
“We are prepared for the worst but we remain hopeful that those who choose to demonstrate at our Capitol do so peacefully,” Michigan State Police Director Joe Gasper told a news conference on Friday.
Illinois Governor J.B. Pritzker said on Friday that while his state had not received any specific threats he was beefing up security around the Capitol in Springfield, including adding about 250 state National Guards troops.
Suzanne Spaulding, a former undersecretary for the Department of Homeland Security, said disclosing such security measures can act as an effective deterrent.
Security experts are worried that the riot on Capitol Hill last week has emboldened those who wish to commit violence in other places. The actions of those in Big Tech who are censoring conservative voices on social media is also seen as adding fuel to the fire, providing additional grievances for protesters. Those in charge of public safety are preparing for the worst, hoping for the best.
Texas