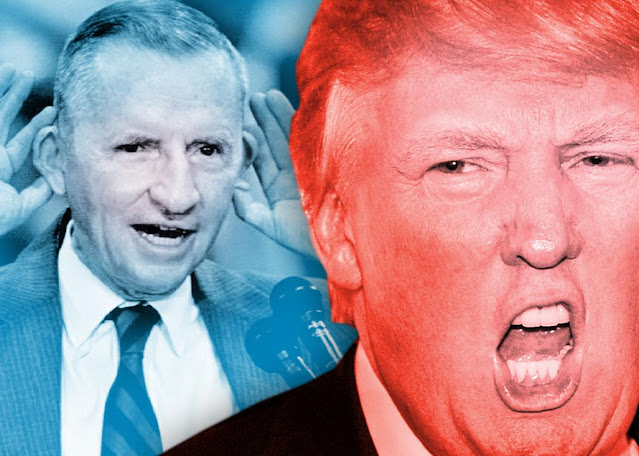 Ross Perot caused a sensation when he ran for president as an independent in 1992 against Republican President George H.W. Bush and Democrat Bill Clinton. For a period of time in the spring of 1992, Perot was leading the polls. He then shocked the political world by withdrawing from the race during the Democratic convention, only to re-enter in time to participate in the debates. Perot ended up with 19 percent of the vote — the highest vote for an independent or third party candidate since a former president, Theodore Roosevelt, ran on the Progressive ticket in 1912 and came in second in the popular vote.
After losing to Clinton in 1992, Perot essentially disappeared. He ran again in 1996 as the Reform Party candidate, but his moment had passed. His support fell to 8 percent. His career seemed to back up what historian Richard Hofstadter once wrote: “Third parties are like bees. Once they have stung, they die.”
The Perot movement, like the Trump movement, was driven by contempt for politics. But the similarity ends there.
The Perot movement was hard to pin down ideologically. Trump’s support, on the other hand, is deeply conservative, particularly on social issues like race, religion, immigration and climate change.
Right-wing themes were far less important to the Perot movement, which had more to do with process than values. Perot believed in “making government work.” He talked incessantly about hiring technologically skilled “world-class experts” to come up with solutions for problems like the federal debt.
There were hints of cultishness and authoritarianism in the Perot movement (“Ross for Boss”) but nothing like the hero-worship of Donald Trump. Perot had faith in popular democracy. His core idea was to ask experts to come up with solutions for public policy problems and then hold “electronic town halls” where the solutions could be debated and approved. It was a highly rational but naive vision: government without politics. By comparison, Trump’s vision is intensely personal and autocratic: government with only one legitimate interest, that of Trump himself.
The impact of the Perot movement was limited to one or two issues. His biggest issue was the deficit, which Perot and his supporters saw as a dramatic example of government failure caused by politics. When Bill Clinton took office in 1993, he assumed that Perot had prepared the country for a dramatic move toward deficit reduction. Democrats passed a tax increase on high-income taxpayers that turned out to be a political disaster, contributing in 1994 to the Democrats’ loss of their majority in the House of Representatives for the first time in 40 years. Perot also embraced criticism of free trade, specifically the North American Free Trade Agreement, which he predicted would result in the “giant sucking sound” of American jobs moving to Mexico.
The Trump movement is likely to have more staying power for several reasons. One is that Trump took strong and defiant positions on the most divisive cultural issues in American politics: white supremacy, religious freedom, resentment of government mandates and gun rights. Trump’s positions on those issues were generally not held by majorities but by intensely committed right-wing minorities. Pro-Trump protests were often driven by the fact that traditional cultural values are losing their dominance and even becoming disreputable (like white supremacy).
The ideological division in American politics had been intensifying for 50 years. Trump didn’t create it. He exploited it — by doing something no other president had done: Instead of trying to heal the division as his four predecessors promised (and failed) to do, Trump deliberately stoked it.
There’s another reason why Trump’s extreme views gained a degree of popular legitimacy: Trump was president of the United States. Perot was not. Having the power of the state behind him helped legitimize Trump’s radical positions. Like his totally irresponsible and unverified claim that the 2020 election was “stolen.” A Reuters-IPSOS poll in November found that just over half of Republicans believe that Trump “rightfully won” the election.
The fact that Trump headed a major political party — Perot did not — gives Trump’s views legitimacy to about 30 percent of the public. A former chairman of the Arizona Republican Party — which is deeply divided over Trumpism — told The New York Times: “The right has become even more emboldened because they had someone in the highest office with a giant megaphone.” In Arizona and other states, conservatives are organizing primary challenges aimed at purging Republican members of Congress who support Trump’s impeachment.
Despite his loss in the election, Trumpism is on the ascendancy in the Republican Party. And it’s likely to remain ascendant unless and until it is firmly established that it’s a losing message.
What Republicans need is an alternative leader with conservative appeal who can challenge Trumpism. It won’t be easy.
Between 2016 and 2020, Trump gained more than 11 million supporters. (The Democratic ticket gained 15.4 million.)
Where did Trump’s gains come from? He did about the same in both elections with young voters, women and college graduates. His gains came mostly from minorities. Trump didn’t carry minorities, but he gained 4 percentage points with Black and Latino voters and 7 points with Asian-Americans. Trump’s strength with minority voters remains the greatest unexplained mystery of the 2020 election.
Opinion