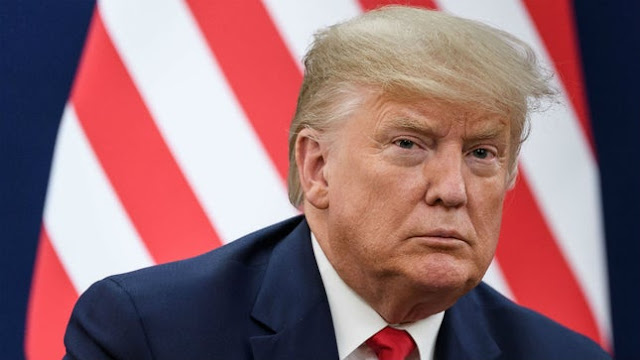 Democrats are mulling whether they can use the 14th Amendment to prevent former President Trump from ever holding office again.
The discussions are in the early stages — and top members of the Senate caucus aren’t yet convinced it’s a viable remedy — but senators are exploring their options as they plot a strategy after Trump’s supporters stormed the Capitol.
“It’s an idea that’s out there that I think people are contemplating in the accountability space,” said Sen. Tim Kaine (D-Va.), who described himself as “quite confident” that Congress could act under the constitutional amendment.
“I just want us to choose a path that maximizes focus on the Biden-Harris agenda,” Kaine added.
Sen. Richard Blumenthal (D-Conn.), who caveated that talk of the 14th Amendment was hypothetical, said it could be applied to Trump, with one mechanism being a resolution from Congress.
“The remedies of the 14th Amendment certainly may be appropriate for someone who incites an insurrection as Donald Trump did,” said Blumenthal, a member of the Senate Judiciary Committee.
Sen. Chris Murphy (D-Conn.), cautioned that it was early, but called using the 14th Amendment “certainly a possibility.”
“All of these are questions of first impression, in terms of constitutionality,” he added. “I certainly think there is a 14th Amendment avenue separate and aside from impeachment.”
The possibility of using the 14th Amendment comes as Democrats have publicly called for Trump to be blocked from holding office down the line. Trump riled up his supporters on Jan. 6 at a rally outside the White House and urged them to march to the Capitol, where rioters subsequently stormed the building in a melee that left five people dead.
Senate Majority Leader Charles Schumer (D-N.Y.) has already pledged to hold a vote on blocking Trump from holding future office if the Senate votes to convict him as part of an impeachment trial for “willfully inciting violence against the Government of the United States.” Though conviction requires two-thirds support, barring him from office in a subsequent vote would take only a simple majority.
“After what he has done, the consequences of which we were all witness to, Donald Trump should not be eligible to run for office ever again,” Schumer said on the Senate floor earlier this week.
The House is expected to send the lone impeachment article to the Senate on Monday, though Schumer noted he was discussing timing and the duration of the trial with Senate Minority Leader Mitch McConnell (R-Ky.). Absent an agreement, the trial will start at 1 p.m. the day after the article is received, unless that’s a Sunday.
To convict Trump in an impeachment trial, Democrats would need their entire caucus plus 17 Republican senators, a high bar that they could fail to reach. Though several GOP senators and McConnell have blamed Trump for provoking the mob that stormed the Capitol, no Senate Republican has committed to voting to convict.
Kaine noted that the 14th Amendment could be pursued before or even after a trial if senators weren't able to convict Trump. He added that while there were “extensive discussions” going on about pursuing the 14th Amendment, the decision was ultimately up to leadership.
Spokesmen for Schumer didn’t respond to a question about whether he supports trying to use the 14th Amendment separate from an impeachment trial.
The 14th Amendment jumped into the national discussion in the wake of the Capitol attack, in addition to impeachment and talk of invoking the 25th Amendment, an idea rejected by then-Vice President Pence.
Section 3 of the 14th Amendment says that no public officials who had “previously taken an oath” to support the Constitution will hold office if they “have engaged in insurrection or rebellion against the same, or given aid or comfort to the enemies thereof."
But there's skepticism from some high-ranking Democrats that the 14th Amendment could be used to block Trump from holding future office.
Sen. Dick Durbin (D-Ill.), Schumer’s No. 2, noted that he had a “long conversation” with Kaine but wasn’t yet sold on the idea that it could be pursued without Trump being convicted first.
“I haven’t been convinced yet because the 14th Amendment is not explicit on how you determine whether someone participated in an insurrection. ... There is a real serious question if that conviction has not taken place, whether the Congress can have a finding, or the Senate can have a finding, that they’re guilty of insurrection and whether that’s sufficient. So it’s unresolved,” Durbin said.
Section 5 of the 14th Amendment stipulates that Congress has enforcement power “by appropriate legislation.”
But using the 14th Amendment to remove a president would put Congress in murky waters, both legally and politically.
The University of Virginia’s Philip Zelikow recently wrote in Lawfare that “Congress can apply the 14th Amendment disqualification to Trump, by majority vote.”
But University of Chicago Law School’s Daniel Hemel countered that barring Trump with only a simple majority vote “would raise serious constitutional questions.”
“Trump’s defenders would no doubt argue that the law violates the bill of attainder clause, and unlike many of Trump’s legal arguments, this one would be far from frivolous,” he added.
Instead, Hemel said, a better way would be for Congress to set up a judicial proceeding that would determine if someone was disqualified under Section 3 of the amendment.
Sen. Ben Cardin (D-Md.) said he wanted more information, but questioned whether Congress needed to act in order for Trump to be blocked from future office.
“He may already be barred,” Cardin said.
Kaine, meanwhile, floated the idea that invoking the 14th Amendment against Trump could take several paths, but one option would be passing a resolution, which he believes would take 60 votes in the Senate, requiring the support of at least 10 Republicans.
“It would be a 60 vote threshold,” he said. “And it wouldn’t require a trial. It would be a debate on a resolution … so take less time, easier threshold. If you can’t get to 60, you won’t get to 67.”
National