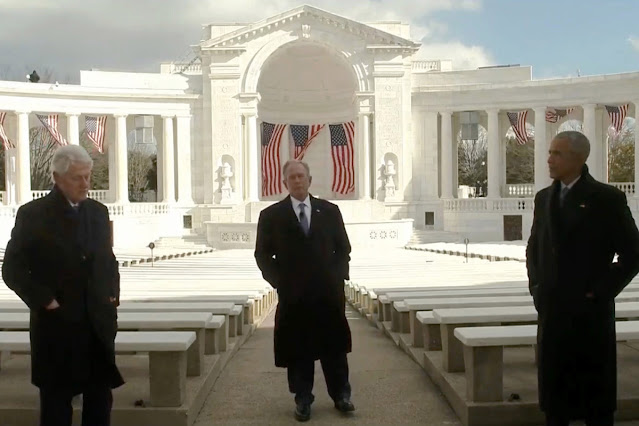 Former presidents Bill Clinton, George W. Bush and Barack Obama reflected on the inauguration of President Biden on Wednesday, highlighting the imperativeness of a peaceful transition of power in a video message broadcast on the evening Biden was sworn in as the 46th commander-in-chief.
"Inaugurations signal a tradition of a peaceful transfer of power that is over two centuries old," Obama said.
Their remarks came as former President Trump refused to concede to Biden for weeks after the 2020 election was called in Biden's favor and barely acknowledged his win until Trump's very last days in the White House. Trump also declined to attend the inauguration, widely regarded as a snub to the incoming president that hadn't happened in centuries.
“The fact that the three of us are standing here talking about a peaceful transfer of power speaks to the institutional integrity of our country,” Bush said.
Clinton noted the challenges the country has faced.
“This is an unusual thing. We are both trying to come back to normalcy, deal with totally abnormal challenges and do what we do best, which is try to make a more perfect union. It’s an exciting time,” the 42nd president said.
The video shows the three former presidents standing in the amphitheatre at Arlington National Cemetery, where they accompanied Biden to a ceremony where he paid his respects at the Tomb of the Unknown Soldier.
Obama urged Americans to listen to one another, and reflected on the day he took office, stating that Bush and former first lady Laura Bush showed him and former first lady Michelle Obama "grace and generosity." He referred to it as "one of my fondest memories of the inauguration."
"It was a reminder that we can have fierce disagreements and yet recognize each other's common humanity and that as Americans we have more in common than what separates us," Obama said.
The former leaders reiterated Biden's message of unity, urging Americans to narrow deep political divides that have overtaken the national conversation.
Schedule of Biden-Harris Inauguration Day: Timeline of events and how...
A parade of purple at Biden inauguration
"Everybody needs to get off their high horse and reach out to their friends and neighbors and try to make it possible," Clinton said.
All three sent Biden well wishes and were rooting for his success, noting that they would be available to guide the new administration toward accomplishments.
"Mr. President, I'm pulling for your success. Your success is our country's success," Bush said.
National