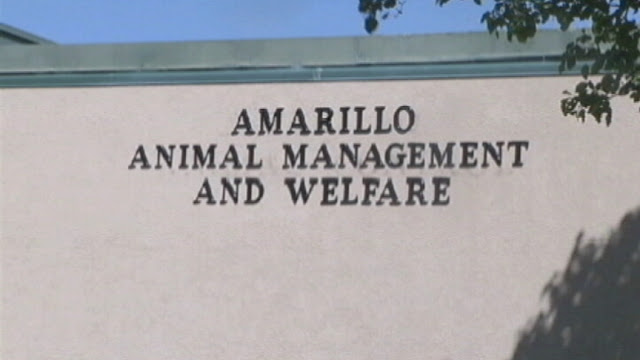 Amarillo Animal Management & Welfare (AMW) is providing information related to a photograph used to identify the owner of an aggressive and dangerous animal.
On Jan. 8, AMW officers responded to a call from a local Amarillo church which also aids the homeless. A dog was attempting to bite people on the property. While it required two AMW officers to safely apprehend the dog due to the animal’s aggressiveness, the dog was taken to the AMW shelter.
As is AMW policy, a photo of the dog was taken by AMW staff and posted online to locate the owner. The photo was the only photo that could be used as the dog repeatedly attempted to attack AMW staff as they attempted to obtain the photo. The injuries depicted in the photo are from the dog biting a metal catch pole – and not from injuries sustained by AMW staff.
The dog was placed on a mandatory 3-day stray animal hold.  During this time, no one came forward to claim ownership of the animal. After AMW staff consulted with the Amarillo Panhandle Humane Society, the dog was humanely euthanized on Jan. 13.
“The top priority at Amarillo Animal Management & Welfare is the safety of the public and the animals in our care,” said AMW Interim Director Rob Sherwin. “AMW responded to a call for help to address a very dangerous situation involving an animal that was a threat to others. AMW takes the safety of animals in our care seriously, and the injuries this particular animal sustained were the result of its aggressiveness to others.
“Public safety will always be a top priority for Amarillo AMW.”
Local