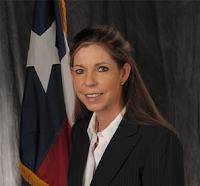 On Tuesday, the Randall County Commissioners Court voted Tuesday to confirm former Precinct 1 Commissioner Christy Dyer as the new county judge. Dyer will serve the remainder of former county judge Ernie Houdashell's term.
“We had 16 people, roughly 16 people apply, we interviewed four, I made the nomination, it was seconded to appoint Christy Dyer to finish out the judge’s 23 month, the rest of his term,” said Mark Benton, Randall County Commissioner PCT. 2
Dyer was a licensed stockbroker before joining her family business of Dyer's Bar-B-Que. She was reelected in 2020 to the commissioners court seat after running unopposed.
Houdashell served as the county judge for over 10 years before his death in November of 2020.
Dyer is the first female county judge in Randall County's history.
Local