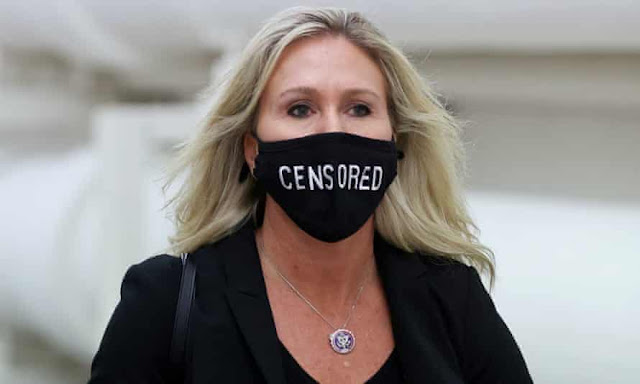 The Republican Party is riven by internal tensions, and moderate voices fear it is headed for disaster at the hands of the far right.
The centrists’ worry is that the party is branding itself as the party of insurrectionists and conspiracy theorists. This spells catastrophe for the GOP’s ability to appeal beyond a hardcore base, they say.
Ten House Republicans voted to impeach President Trump for inciting the Jan. 6 ransacking of the Capitol, but the chances of him being convicted in the Senate seem close to zero.
The GOP activist base still loves Trump, and a related ecosystem of bellicose conservative media has lambasted those who have broken from him.
Now the GOP is spending the critical early days of President Biden’s administration squabbling over what to do about Rep. Marjorie Taylor Greene (R-Ga.).
Greene, a backer of the QAnon conspiracy theory, has also backed social media posts calling for the execution of Speaker Nancy Pelosi (D-Calif.). Video has emerged of Greene taunting David Hogg, the young gun control activist who survived the 2018 high school massacre in Parkland, Fla.
Greene has, so far, not been stripped of her committee assignments by House Minority Leader Kevin McCarthy (R-Calif.), even though this fate befell then-Rep. Steve King (R-Iowa) in 2019 when he suggested that white supremacism was not offensive.
Tensions within the party are at boiling point.
A spokeswoman for Rep. Adam Kinzinger (R-Ill.), one of the 10 GOP House members to vote for Trump’s impeachment this month, sent an email statement blasting Greene.
“Congressman Kinzinger has said from day one that QAnon has no place in Congress. And while he respects the voice of the people and their right to elect a Marjorie Taylor Greene, he does not agree with the decision to give her a committee seat,” the spokeswoman said.
The statement continued: “Rep. Greene’s continued perpetuation of conspiracy theories, lies, and vitriol is frankly unacceptable. And it is not compatible with the integrity of the institution nor the principles of the party — the Republican Party that Congressman Kinzinger belongs to.”
Greene, for her part, remains defiant.
“Democrats and their spokesmen in the Fake News Media will stop at nothing to defeat conservative Republicans,” she said in a statement.
The episode is just the latest flashpoint for a party that is engaged in a fight for its soul.
“A lot of us miss the old days of battling over ideas,” said Brendan Steinhauser, a Texas-based GOP consultant. “Now it is something completely different — trying to convince people that these QAnon people are crazy and illegitimate and all the other things.”
“It’s bleak, and it is going to take some leadership, from people who are running for president [in 2024] to people in Congress, to step up and say this,” Steinhauser added.
There is not much sign of that right now, however. McCarthy has said he “plans to have a conversation” with Greene. The perceived weakness of that response has disgruntled some in his own conference.
It has also drawn outrage from Democrats. Rep. Alexandria Ocasio-Cortez (D-N.Y.) mocked McCarthy in a Wednesday evening interview with MSNBC’s Chris Hayes.
“The thing that I think is: What is he going to tell them? ‘Keep it up’?” she said. “There are no consequences in the Republican caucus for violence, there is no consequence for racism, no consequences for misogyny, no consequences for insurrection. And 'no consequences' mean that they condone it.”
Rick Tyler, a harsh Trump critic who served as communications director for Sen. Ted Cruz’s (R-Texas) 2016 presidential campaign, said it was perhaps the one time in his life he had agreed with the left-wing New Yorker.
“There are a lot of [Ocasio-Cortez’s] policies I disagree with. But Taylor Greene? She’s insane,” Tyler said.
In Tyler’s view, the rot in the party began with Trump’s victory in the 2016 Republican presidential primary and is now reaching a nadir. The immediate future he foresees is one in which Trump-like candidates can win primaries in solid Republican districts but will have a disastrous impact on the party’s overall appeal.
“The Republican Party will lose general elections, lose Senate seats, lose governorships — but they will continue to send nutcases like Taylor Greene to Congress because they will win red districts. Then that will become a self-fulfilling prophesy, making the party more and more radicalized until people won’t stand for it anymore.”
Even Republicans skeptical of Trump or appalled by QAnon recognize that elected GOP officials face a grim calculus. Can they distance themselves from ideas beloved by the base and escape with their political lives?
“If you don’t win your primary, you have no November,” said Doug Heye, a former communications director for the Republican National Committee.
Heye, like others in the center right, does not hold out much hope of his wing of the party reasserting control anytime soon.
“Republicans can only fix this if they want to,” he said. “And right now it appears they don’t want to, given their warm embrace of Trump and everything that came with that.”
National