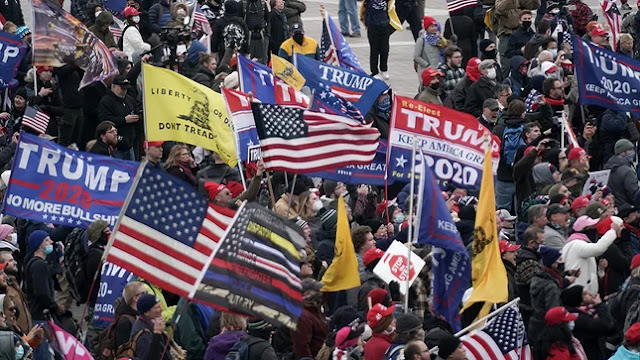 A chaotic and violent scene unfolded at the Capitol on Wednesday as supporters of President Trump swarmed the building, forcing a lockdown and various confrontations with police.
Vice President Pence and Sen. Chuck Grassley (R-Iowa), the Senate president pro tempore, were taken from the Senate chamber after protesters entered the Capitol to protest as a joint session of Congress convened to certify President-elect Joe Biden's win.
The House and Senate gaveled out of their debates on the Electoral College results as footage showed protesters breaching security and entering the building.
The doors of the House chamber were locked for safety purposes, and police later worked to evacuate lawmakers.
Lawmakers and some former White House officials urged President Trump to condemn the violence erupting on the Capitol grounds, after Trump spoke earlier in the day seeking to rally supporters to protest the election.
"Condemn this now, @realDonaldTrump - you are the only one they will listen to. For our country!" tweeted former White House communications director Alyssa Farah.
"The President's tweet is not enough. He can stop this now and needs to do exactly that. Tell these folks to go home," tweeted former White House chief of staff Mick Mulvaney.
Trump had tweeted earlier Wednesday afternoon urging supporters to "stay peaceful" and support law enforcement without expressly condemning those using force to enter the Capitol building.
The president tweeted again 35 minutes later to condemn violence.
"I am asking for everyone at the U.S. Capitol to remain peaceful. No violence! Remember, WE are the Party of Law & Order – respect the Law and our great men and women in Blue. Thank you!" he wrote.
Lawmakers, staff and reporters were being moved from the Capitol building Wednesday afternoon as scores of demonstrators forcefully entered the building and clashed with police.
Those in the House chamber were given gas masks amid reports that police may use tear gas in an effort to clear the area outside the chamber. Images shared by reporters inside the chamber showed doors to the room barricaded and several police officers with guns drawn.
Several lawmakers tweeted that they were sheltering in place in their offices as the scene unfolded. Police earlier had evacuated several buildings including the Library of Congress's Madison Building across from the Capitol and the Cannon House office building.
Police issued a warning to Capitol Hill staffers, warning those in Capitol police also told those in the Cannon House building to "take visitors, escape hoods, and Go Kits" and report to a tunnel connected to a nearby building.
National