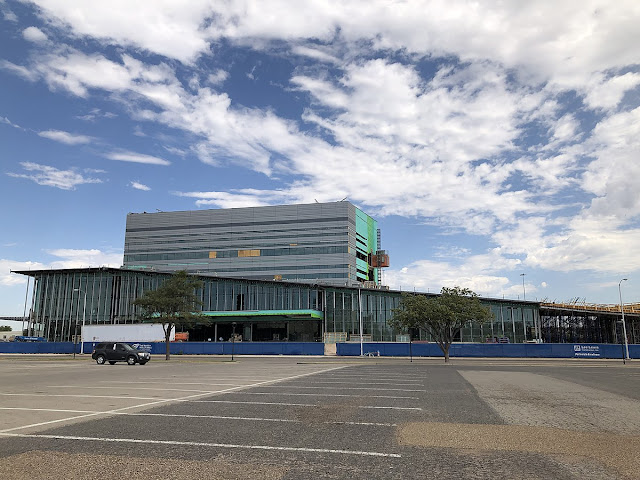 Buddy Holly Hall is a new performing arts center hoping to improve Lubbock’s art scene and to bring the community together.
Michelle Stephens, Lubbock Entertainment Performing Arts Association executive director, said a large performing arts center in Lubbock has been desired by the community for the past 30 years.
“If you look back to the City of Lubbock strategic plans all the way back to the ‘80s, there’s been a need and a desire for a performing arts center,” Stephens said. “It took until now to get the right group and the right people and all the stars aligning for the Buddy Holly Hall to happen.”
The new facility includes two theaters, ballet studios, a restaurant and a multipurpose space, Stephens said. LEPAA expects Buddy Holly Hall to attract audience members from all over West Texas and New Mexico.
The architects created West Texas design elements throughout the building, Stephens said. There is a chandelier lighting inside Helen David Jones theater, which was designed to look like a West Texas starry night.
“When all the lights are out in the theater and just the chandelier lighting is on, it looks like a starry night inside,” Stephens said. “It’s all completely custom and unique, just for Buddy Holly Hall and inspired by Lubbock.”
The design and the large spaces available allow Buddy Holly Hall to attract local and national talents who are excited to perform at the hall, Holly Fields, Buddy Holly Hall director of sales and marketing, said.
“We have a lot of tours that are very interested in the Buddy Holly Hall and coming through the city,” Fields said.
Buddy Holly Hall hopes the events hosted at the venue will engage Texas Tech students with the community, Charlton Northington, Buddy Holly Hall general manager, said.
“We look forward to hearing from the student body about what they want to see and make Lubbock a more exciting place for them to go away to school and be excited about what’s happening not only on campus but here at Buddy Holly Hall,” Northington said.
Buddy Holly Hall is rooted in partnerships throughout the Lubbock community, Stephens said. The partnerships bring various parts of Lubbock together into a single venue and offer a way for all community members to enjoy the facility.
The second theater at the venue was created in partnership with Lubbock Independent School District for its schools to have a performance center, Stephens said. A partnership with Ballet Lubbock also brought the addition of dance studios to the facility.
The restaurant and concessions available at the venue are provided in partnership with The United Family, Stephens said.
“It’s not things that you can go into Market Street and buy,” Stephens said. “It’s a completely special menu unique just for Buddy Holly Hall.”
Buddy Holly Hall will partner with Tech to allow the Talkington College of Visual and Performing Arts to host events at the center, Stephens said. The hall is working on scheduling opera performances with the college.
The hall is focused on ensuring COVID-19 safety protocols are being followed to protect both audience members and performers, Northington said.
The seats available in the audience were reduced to half capacity to ensure proper social distancing, Northington said. There are at least two seats between each group of people and every other row is blocked off.
“One of the first things that people will find out is that we’re taking temperatures when they come in the building,” Northington said. “We also have signage throughout the building encouraging everyone to agree to remain socially distant throughout the building.”
Buddy Holly Hall is hosting two performances by Steve Treviño Jan 30. at 7 p.m. and 10 p.m. Tickets are still on sale for the 10 p.m. show at buddhollyhall.com.
Local