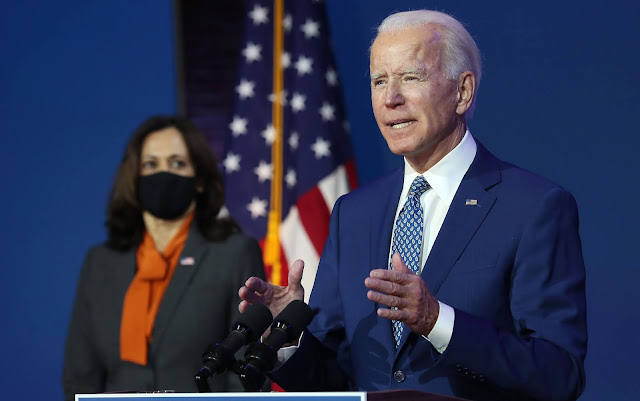 President-elect Joe Biden’s transition team outlined dozens of executive actions the incoming administration is set to take in its first 10 days as it faces down some of the most serious crises in the nation’s modern history.
Ron Klain, Biden’s incoming White House chief of staff, wrote in a memo released Saturday that the orders will focus on the quartet of “the COVID-19 crisis, the resulting economic crisis, the climate crisis, and a racial equity crisis.”
He said the orders will be accompanied by a “robust” legislative agenda.
“These executive actions will deliver relief to the millions of Americans that are struggling in the face of these crises. President-elect Biden will take action — not just to reverse the gravest damages of the Trump administration — but also to start moving our country forward,” wrote Klain.
“These actions will change the course of COVID-19, combat climate change, promote racial equity and support other underserved communities, and rebuild our economy in ways that strengthen the backbone of this country: the working men and women who built our nation.”
Biden will kick off the actions on Wednesday – the day of his inauguration – with what Klain said would be about a dozen executive orders on all four issues.
Biden also plans on asking the Education Department to extend the federal hiatus on student loan payments and interest on federal student loans, rejoining the Paris Climate Accords and undoing the Trump administration’s travel ban on seven Muslim-majority countries.
Biden also will issue a mask mandate on federal property and interstate travel and extend a pause on evictions and foreclosures.
Biden will follow up on Thursday with executive actions to “move aggressively to change the course of the COVID-19 crisis and safely re-open schools and businesses, including by taking action to mitigate spread through expanding testing, protecting workers, and establishing clear public health standards.”
The White House will spend the remaining eight days instructing his Cabinet to take action to boost economic aid  disseminated during the pandemic and take executive action on issues like reuniting children separated from families after crossing the border, among others.
“Of course, these actions are just the start of our work. Much more will need to be done to fight COVID-19, build our economy back better, combat systemic racism and inequality, and address the existential threat of the climate crisis. But by February 1st, America will be moving in the right direction on all four of these challenges — and more — thanks to President-elect Joe Biden’s leadership,” Klain said.
The effort comes as the Senate gears up for the second impeachment trial of President Trump in the early days of Biden’s presidency. The House's impeachment of Trump has raised concerns among Democrats that the Senate will be slow to take up the White House’s agenda and partisan fighting will eliminate the traditional honeymoon period new presidents typically enjoy with Congress.
Democrats have criticized Trump for relying heavily on executive actions throughout his presidency, but Klain said “the legal theory behind [the orders] is well-founded and represents a restoration of an appropriate, constitutional role for the President.”
The transition has not outlined many components of its upcoming legislative agenda, but Biden did roll out a $1.9 trillion plan to combat the coronavirus and its financial fallout, the first legislation he wants Congress to tackle.
The package includes $415 billion focused on combating the COVID-19 pandemic, over $1 trillion in direct aid to individuals and families and $440 billion in assistance to businesses.
Among the priorities are $1,400 in additional stimulus checks to Americans who qualify for them, adding to $600 checks already passed out in December; an extension for key unemployment programs from mid-March to the end of September; and an increase in weekly additional unemployment assistance from $300 to $400.
National