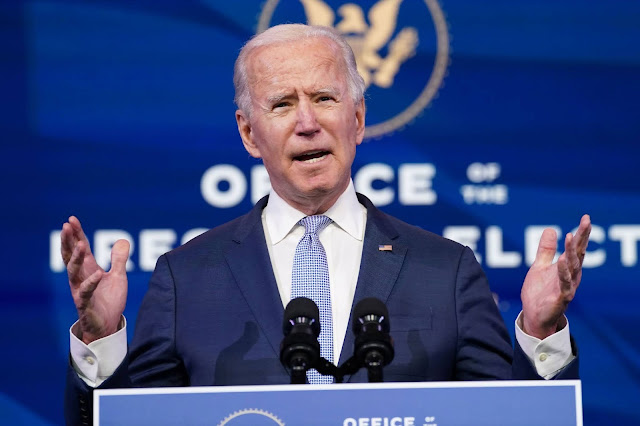 President-elect Joe Biden on Thursday outlined his $1.9 trillion stimulus proposal and called for swift action on it, warning that the health of the nation and its economy hang in the balance.
“The crisis of human suffering is in plain sight. We have to act and we have to act now,” Biden said during a speech in Wilmington, Del. “We cannot afford inaction.”
Speaking six days before he will be inaugurated as the 46th president of the United States, Biden laid out a plan that would support coronavirus vaccination efforts, help reopen schools, deliver critical aid to workers and small businesses, tackle the hunger crisis and send funding to state and local governments.
He said that his plan would be two-pronged.
The first element is the “American Rescue Plan” the president-elect is asking Congress to pass immediately. The second is a forthcoming recovery package that he plans to lay out in February that will involve investments in infrastructure, research and development and clean energy.
Biden said that he plans to describe his recovery package during an address to a joint session of Congress in February.
Biden is proposing a $1.9 trillion relief package that includes $415 billion focused on combating the COVID-19 pandemic, over $1 trillion in direct aid to individuals and families and $440 billion in assistance to businesses.
The plan includes funding for $1,400 in additional stimulus checks to Americans who qualify for them, adding to $600 checks already enacted in December; an extension for key unemployment programs from mid-March to the end of September; and an increase in weekly additional unemployment assistance from $300 to $400.
The proposal also calls for increasing the federal minimum wage to $15 an hour over time. The proposal also sets aside $20 billion for a national vaccination program and $50 billion to scale up coronavirus testing.
Biden said Thursday evening that he looked forward to working with Congress to act on legislation quickly, calling for unity as the country confronts the dueling crises of a deadly pandemic and economic recession.
“Unity is not some pie in the sky dream. It’s a practical step to getting the things that we have to get done as a country, get done together,” Biden said.
The president-elect applauded Congress for passing the $900 billion package in December after months of stalled negotiations, but he emphasized repeatedly that more action is needed quickly to heal the ailing economy and address the widening wealth gap.
“The decisions we make in the next few weeks and months are going to determine whether we thrive in a way that benefits all Americans or that we stay stuck in place where those at the top do great while economic growth for everyone else is just a spectator sport and where American prospects dim, not brighten,” Biden said.
Biden’s remarks signaled that he plans to hit the ground running once he takes office next Wednesday to tackle the pandemic, including by pressuring Congress to swiftly work to come together in bipartisan fashion to approve a relief package to address the surging virus and its impact on American life.
The U.S. set another daily record for coronavirus deaths this week, with the country recording 4,327 deaths on Tuesday related to the virus.
And while two successful coronavirus vaccines yield promise in the fight against the virus, Biden sharply criticized the Trump administration’s vaccine rollout as an “dismal failure thus far.” He plans to lay out his own vaccine plan in an address on Friday afternoon.
Getting a package through Congress will be an early test for Biden and his push for unity amid high partisan tensions in the country.
Democrats hold control of the White House and narrow majorities in the House and Senate, but Biden has consistently signaled a desire to work with lawmakers across the aisle in order to get things done.
Senior officials with the incoming administration told reporters earlier Thursday that Biden’s package was the result of negotiations with members of Congress, governors and mayors.
“I know what I just described does not come cheaply, but failure to do so will cost us dearly," Biden said. "The consensus among leading economists is we simply cannot afford not to do what I am proposing.”
The Senate will have a full slate of business once it reconvenes on Jan. 19, a day before the inauguration, including moving forward with President Trump’s impeachment trial and processing Biden’s Cabinet nominations.
Biden, who has declined to take a position on impeachment, said earlier this week he hoped the Senate would be able to balance its work so as to make progress on his nominees and economic relief while also handling the impeachment trial.
National