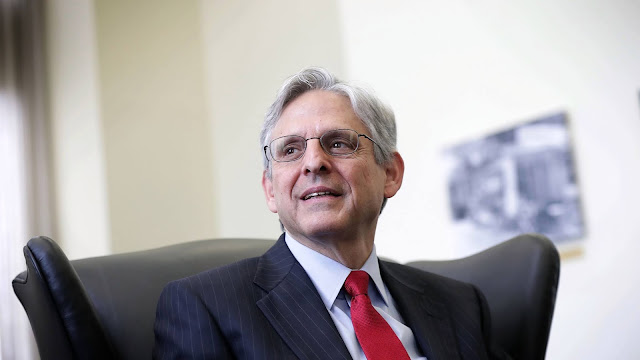 President-elect Joe Biden has selected Merrick Garland, chief judge of the United States Court of Appeals for the District of Columbia Circuit and a former Supreme Court nominee, as U.S. attorney general, according to a person familiar with the decision.
Garland beat out other candidates on the shortlist, including former Sen. Doug Jones (D-Ala.) and onetime deputy attorney general Sally Yates.
Then-President Obama previously nominated Garland to the Supreme Court in 2016 to replace the late Justice Antonin Scalia. Senate Majority Leader Mitch McConnell (R-Ky.) never allowed a vote on Garland and the seat was ultimately taken by Justice Neil Gorsuch in 2017.
A source familiar with the decision said Biden liked Jones for the job, but many of Biden's aides backed Garland as the pick.
Democrats appearing to sweep both U.S. Senate runoffs in Georgia on Tuesday likely made the choice easier. The presumptive victories of Jon Ossoff (D) and Raphael Warnock (D) means the chamber will be split 50-50 between Democrats and Republicans, with Vice President-elect Kamala Harris serving as the tie-breaking vote.
The Democratic majority smooths the path to confirmation for Biden's Cabinet picks, as they would only require 51 votes. That majority is especially critical for confirming Garland, as Biden could then appoint his replacement on the D.C. circuit court, which is considered among the most influential in the country.
Attorney general was one of the only major Cabinet appointments Biden has yet to formally announce. Biden is expected to formally introduce Garland later this week.
Garland would be tasked with carrying out Biden's agenda on criminal justice, which the president-elect has said will focus on issues of racial justice.
Biden's attorney general will also face several politically sticky situations.
The Department of Justice is currently investigating Biden's son Hunter over his taxes. Biden has said he is confident his son did nothing wrong, but the probe will likely hang over his administration for some time.
Garland, if confirmed, will also face pressure from some liberals who hope to see President Trump and members of his administration face investigations or charges for their actions. Biden has said he will not use the Justice Department as a political vehicle.
National