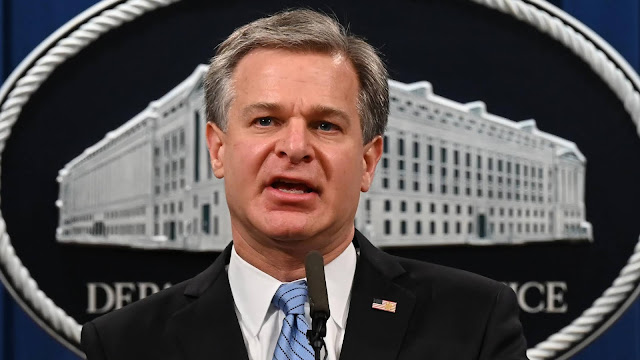 President Biden plans to keep FBI Director Christopher Wray in his position, allowing him to continue serving out his 10-year term.
Wray was nominated by then-President Trump to helm the FBI in June 2017, after Trump abruptly fired James Comey from the position as the bureau was investigating his campaign’s communications with Russia.
White House press secretary Jen Psaki did not directly answer when asked at a briefing Wednesday evening whether Biden had confidence in Wray, saying she had not spoken with Biden about Wray specifically "in recent days."
Psaki tweeted Thursday that her remarks caused an "unintentional ripple" and that she "wanted to state very clearly President Biden intends to keep FBI Director Wray on in his role and he has confidence in the job he is doing."
It is unclear if Biden and Wray have spoken since the new president was sworn in on Wednesday. An FBI official said that all interactions between the bureau and Biden's team have been “very positive.”
The move had been expected after The New York Times reported in December that Biden intended to keep Wray at the helm of the FBI.
The FBI director is appointed to a 10-year term, but does not necessarily serve the full term and can be fired by the president or choose to resign. Wray is currently in the fourth year of his term.
Wray has been credited with maintaining the bureau’s independence amid pressure and attacks from Trump, who regularly criticized the FBI’s role in the Russia investigation. Trump publicly criticized Wray last year for his congressional testimony about antifa and Russian election meddling efforts.
Trump considered removing Wray from the position following the election last year but never went through with it, with Wray maintaining strong support from some of Trump’s Republican allies.
The association representing the 14,000 active and retired FBI agents last year voiced support for Wray and urged Biden to keep him in the position.
Biden’s decision to keep Wray means that the director stays on as the bureau withstands scrutiny for its role responding to the riot at the U.S. Capitol earlier this month. The matter is currently under investigation by the Justice Department inspector general.
The decision was welcomed by House Intelligence Committee Chairman Adam Schiff (D-Calif.), who commended Wray for serving with "great professionalism and integrity."
“I am glad to see that President Biden intends to keep Director Wray in his position, and restore the 10-year terms for FBI Directors. Such terms, which transcend administrations, were intended to insulate a director from the kind of improper personal or political considerations that led Donald Trump to fire former Director James Comey," Schiff said.
“I look forward to our continuing work with Director Wray, as we analyze the intelligence and security failures that led to the Jan. 6 assault on the Capitol, and the need to dramatically expand the focus and resources devoted to the threat of domestic terrorism," Schiff continued.
National