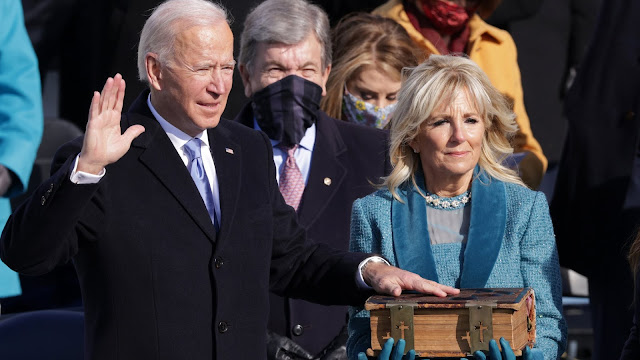 Joe Biden was sworn in on Wednesday as the 46th president of the United States, capping a winding political career and marking the beginning of a new administration.
Biden, surrounded by his family, was given the oath of office by Chief Justice John Roberts at 11:49 a.m. outside the west side of the U.S. Capitol. Biden was sworn in using the Bible used by his late son, Beau Biden, and has been in the family since 1893.
Biden campaigned on a pledge to unite the nation, and he takes office at a tumultuous time in American history. He will be tasked with navigating a raging pandemic, a lagging economy and deep divisions that were on display on Wednesday as former President Trump declined to attend the inauguration proceedings.
“This is America’s day. This is democracy’s day. A day of history and hope, of renewal and resolve," Biden said in his inaugural address.
Biden's inaugural speech lasted about 20 minutes and included repeated calls for unity, as well as a moment of silence to acknowledge the more than 400,000 people in America who have died from the coronavirus.
“This is our historic moment of crisis and challenge. And unity is the path forward. And we must meet this moment as the United States of America," Biden said. "If we do that, I guarantee you we will not fail."
Biden, 78, previously served as vice president under Barack Obama and spent decades representing Delaware in the U.S. Senate. He won the 2020 election, though former President Trump refused to concede. Former Vice President Mike Pence attended Wednesday's ceremonies as a representative from the outgoing administration.
National