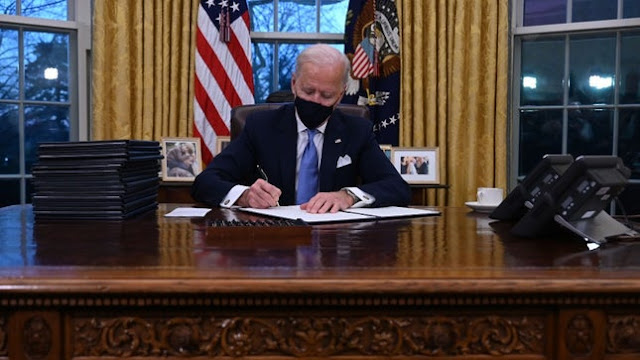 President Biden signed an executive order shortly after his inauguration on Wednesday that rescinded the Trump administration’s controversial 1776 Commission.
The order rescinding the commission comes just days after the Trump administration generated widespread backlash following its commission’s release of the 1776 Report, which was written response to The New York Times’s 1619 Project.
The report, which was released on Martin Luther King Jr. Day earlier this week, went after critical race theory and pushed back on criticisms that the Founding Fathers were “hypocrites” for defending slavery.
“This charge is untrue, and has done enormous damage, especially in recent years, with a devastating effect on our civic unity and social fabric,” the commission wrote in the report.
“Many Americans labor under the illusion that slavery was somehow a uniquely American evil,” it continued.
“It is essential to insist at the outset that the institution be seen in a much broader perspective,” the commission also wrote. It added that “the unfortunate fact is that the institution of slavery has been more the rule than the exception throughout human history.”
The report later stated that the “historical revisionism” it said “tramples”  what it referred to as “honest scholarship and historical truth, shames Americans by highlighting only the sins of their ancestors, and teaches claims of systemic racism that can only be eliminated by more discrimination, is an ideology intended to manipulate opinions more than educate minds.”
The commission was chaired by Trump ally Larry Arnn and conservative television analyst Carol Swain. Others on the body also included prominent conservatives like Charlie Kirk and former Mississippi Gov. Phil Bryant (R). None of them are credentialed historians.
The report prompted sharp criticism from historians and civil rights groups upon its release earlier this week.
ReNika Moore, director of the ACLU’s Racial Justice Program, accused the Trump administration in a statement of pushing a “white supremacist version” of the country’s history with the report and condemned the document for justifying “slavery as ‘more the rule than the exception throughout human history,’ and [comparing] members of the opposing political party to fascist dictators.”
Boston University historian Ibram X. Kendi said the report made it seem as though “those espousing identity politics today resemble proslavery theorists like John C. Calhoun; that since the civil rights movement, Black people have been given 'privileges' and 'preferential treatment' in nearly every sector of society, which is news to Black people.”
The Biden-Harris transition team also hit the report in a statement detailing the president’s plans to rescind the order on Wednesday, accusing the commission of seeking to “erase America’s history of racial injustice.”
The Biden-Harris transition team said the commission’s dissolution is one of several measures the new administration will carry out as part of an executive order the president signed on Wednesday afternoon aimed at advancing racial equity in the country.
The order requires all federal agencies “to undertake a baseline review of the state of equity within their agency and deliver an action plan within 200 days to address unequal barriers to opportunity in agency policies and programs,” the team said.
The order also outlines the launch of a “new equitable data working group to ensure that federal data reflects the diversity of America,” the team said, as well as the tasking of the Office of Management and Budget (OMB) “with working to more equitably allocate federal resources to empower and invest in communities of color and other underserved communities.”
The team said Biden also has asked Susan Rice, former U.S. ambassador to the United Nations who the president tapped months back to head up the White House Domestic Policy Council, to “lead a robust interagency process to hold the federal government accountable for advancing equity for families across America.”
National