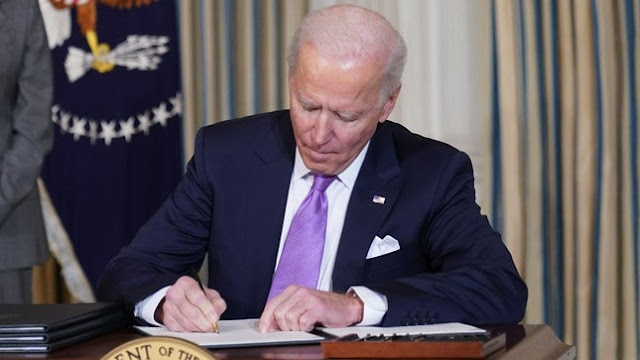 President Biden has leaned heavily on executive actions during his first 10 days in office, far outpacing his predecessors as he works to rapidly dismantle Trump administration policies and check off key campaign promises.
It’s unlikely that Biden will keep up the pace of executive orders, and he has already come under scrutiny from some corners for relying on the pen after pledging to seek unity and bipartisanship. Still, the initial wave of signings reflects a new reality where presidents are increasingly turning to unilateral action in the face of congressional gridlock.
“He is going to use the levers that every president in history has used: executive actions,” White House press secretary Jen Psaki said at a briefing Thursday. “But he also feels it’s important to work with Congress, and not just one party — both parties — to get things done.”
Experts cautioned, however, that executive actions can be challenged in court, while others can be easily reversed by a successor of a different party. A prime example was on display this week when Biden rescinded the so-called Mexico City policy, which requires that foreign groups receiving family planning aid from the U.S. government agree not to provide or promote abortions.
The policy was first announced by President Reagan in 1984, and it has been repeatedly reversed by Democratic presidents and reinstated by Republican presidents ever since.
“There is no substitute for legislation,” said Paul Light, professor of public service at New York University. “You cannot build an administration on executive orders. They’re facilitators, they really send a strong message, but you have to push Congress to come with you.”
Biden has signed 28 executive orders during his first 10 days in office, a furious pace compared with other presidents in a comparable time period. Former President Trump signed seven executive orders in January 2017, former President Obama signed nine in January 2009 and former President George W. Bush signed two in January 2001.
Overall, Biden has signed dozens of executive actions, which also include presidential memorandums and proclamations. But it’s the orders that are considered the most powerful since they carry the force of law and can be litigated in court.
Biden’s team choreographed rollouts in which he announced executive orders each day for his first week in office, focusing on a different policy area each time. The approach allowed Biden to check off campaign promises and signal to different constituencies that he was delivering on their issues.
“There are some of them that are more symbolic than substantive, and some of them are pretty low-hanging fruit in terms of revoking Trump actions. Even so, the precision of the rollout is sharp compared to the Trump administration,” said Andy Rudalevige, the chair of the Department of Government and Legal Studies at Bowdoin College in Maine.
Biden’s actions have in large part been geared toward unraveling Trump policies that Democrats regard as harmful and damaging. With the stroke of a pen, Biden has rejoined the Paris climate agreement, halted work on the Keystone XL pipeline, reversed the ban on travel from Muslim-majority nations and repealed the Mexico City policy.
He has also taken executive actions that fulfill key campaign promises. On his first day in office, Biden strengthened the Deferred Actions for Childhood Arrivals (DACA) program, and took additional action to require face masks on federal property and on planes, trains and buses that cross state lines.
The breadth of the orders drew expected pushback from conservatives, who accused Biden of betraying his unity message and overstepping his presidential authority. Republicans were notably less vocal when Trump issued his own spate of executive orders, however.
But Biden’s moves have received pushback from others as well. The New York Times editorial board implored the president to “ease up” on the executive actions on Thursday, describing them as a “flawed substitute for legislation” that ultimately result in instability because they can be overturned by the next officeholder.
White House officials have been adamant that Biden’s executive actions are not a replacement for legislation, but are intended to both undo what they characterize as harmful policies under the previous administration and address pressing and unprecedented crises.
Matt Bennett, co-founder of the center-left think tank Third Way, called the Times editorial “silly” and said the circumstances Biden is facing are unique because the country is in the midst of four crises: the pandemic, economic recession, climate change and racial injustice.
“If there are things he can take action on quickly to staunch the bleeding in any of these four areas he’s going to do it, but he is very aware there is plenty he can’t do on his own and he’s going to need Congress,” Bennett said.
While he has moved ahead unilaterally on several fronts, Biden is trying to leverage his Senate experience and relationships in negotiations with Congress in order to pass a coronavirus relief bill and other legislation down the road. The success of those pursuits could very well define his presidency.
Allies say that Biden’s opening salvo set a tone of action and inclusivity and drew contrast with the previous administration, but they acknowledge he does not want to lean on executive power alone.
“To me, what he is doing is setting the tone: I am the antithesis of the previous four years,” said Moe Vela, director of administration under the Obama administration and senior adviser to Biden when he served as vice president. “He’s not just going to govern by executive power. I think he wanted to set the stage, set the tone and set the message.”
Light, the NYU professor, said it will be politically important for Biden to ink a major legislative achievement this year, especially if he is to seek a second term in office. If he is still signing executive actions at a similar pace next year, Light said, “that is a sign of impending catastrophe.”
“He does not want to come out of this year with nothing by way of a major legislative accomplishment,” Light said.
National