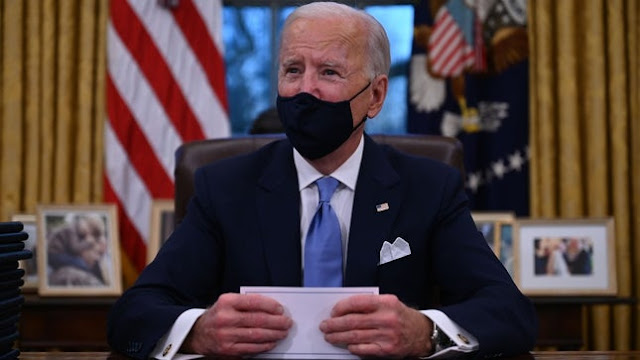 President Biden has signed what is expected to be a sweeping executive order that revokes a key permit for the controversial Keystone XL pipeline, halts oil and gas leasing at a wildlife refuge in Alaska and carries out several other environmental actions.
This deals a devastating blow to the approximately 1,200-mile-pipeline that carried oil from Canada to the U.S. and that was opposed by several environmental and indigenous groups.
The action reverses a decision on a project championed by President Trump, who first issued a permit allowing it to cross the border during the first months of his presidency.
Environmentalists have been critical of the pipeline, particularly because it’s supposed to carry oil made from tar sands, whose production is carbon intensive.
Tribes have also expressed opposition, saying that the pipeline would cross onto their lands and violate their treaty rights.
TC Energy, the company behind the pipeline, released a statement on Wednesday expressing disappointment in the decision, arguing that its pipeline would bolster energy security in North America and provide jobs.
The company also said it would “review the decision, assess its implications, and consider its options” but added that the pipeline’s advancement will be suspended.
Many Republicans opposed the move, and a group of five GOP senators wrote to Biden on Tuesday urging him to “support the completion and operation” of the pipeline.
Biden’s order is also expected to place a temporary moratorium on oil and gas leasing activities at the Arctic National Wildlife Refuge, coming just one day after the Trump administration issued leases from its first sale.
The refuge is home to grizzly bears, polar bears, gray wolves and more than 200 species of birds. It contains land considered sacred by the Gwich’in people.
A 2017 tax law requires two lease sales at the refuge by the end of 2024, and one of those occurred at the tail end of the Trump administration, in a manner that critics argued was rushed. Biden, however, opposes oil and gas leasing at the refuge, and pledged to “permanently” protect it on the campaign trail.
The temporary moratorium would stop short of a campaign pledge by Biden to ban new permits for oil and gas leasing on public land and in public waters.
Asked during a press briefing whether the administration still had that commitment, White House Press Secretary Jen Psaki said "we do and the leases will be reviewed."
The order is expected to further reestablish the Interagency Working Group on the Social Cost of Greenhouse Gases, a group formed under the Obama administration that sought to account for the harms caused by emissions in agency rule-making.
While the Obama administration assessed a $50-per-metric-ton cost to carbon, the Trump administration used a $7-per-metric-ton figure, a move the Government Accountability Office found systematically underestimated the damage caused by carbon pollution.
It's also expected to direct agencies to review boundaries for the Grand Staircase-Escalante, Bears Ears and Northeast Canyons and Seamounts Marine National Monument.
Trump reduced the protected acreage of the Grand Staircase-Escalante and Bears Ears national monuments over objections from environmentalists and Native Americans. He also removed protections from the Northeast Canyons and Seamounts Marine National Monument in an attempt to open it to more commercial fishing.
Wednesday’s order is also slated to direct agencies to review standards for vehicles, appliances and buildings that were rolled back under Trump.
National