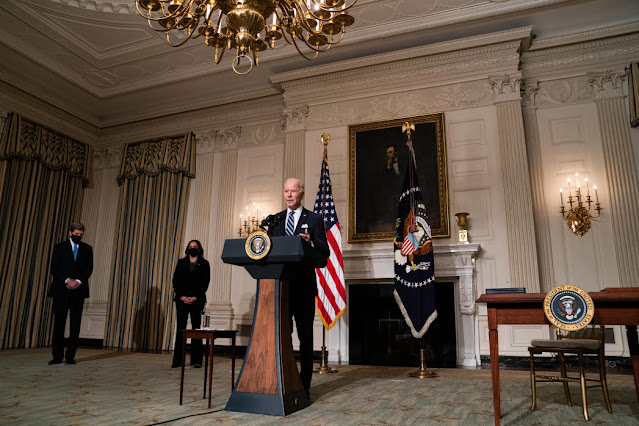 President Joe Biden signed a fresh batch of executive orders Wednesday intended to “supercharge” his administration’s response to climate change.
The orders are intended to put the United States back into the mix on international climate initiatives, as well as better coordinate the country’s domestic efforts to reduce greenhouse gas emissions.
“Just like we need a unified national response to COVID-19, we desperately need a unified national response to the climate crisis,” Biden said during the signing ceremony in the State Dining Room.
The new executive orders come on the heels of a slew of first-day climate actions that included rejoining the Paris climate agreement and rejecting the Keystone XL pipeline.
The new orders include scheduling a major climate summit for Earth Day on April 22, directing all agencies to integrate climate policy into their international efforts and establishing a central White House office responsible for coordinating and implementing the domestic climate agenda, according to administration summaries.
They direct federal agencies to buy zero-emission vehicles made in America, promote better facility resilience in the face of climate impacts and freeze new oil and natural gas leases on public lands or offshore waters. The orders direct federal agencies to seek new opportunities for promoting clean energy technologies and infrastructure.
They establish a Civilian Climate Corps Initiative through which Americans would work on restoring public lands, increasing reforestation and protecting biodiversity. They also stress the importance of objective science in government policymaking and the need for environmental justice.
That includes the development of a screening tool to identify disadvantaged communities and a goal of delivering 40 percent of federal investments in the area to those communities.
Pausing new oil and gas leases on public lands prompted the strongest immediate reaction and came under swift attack from oil and gas interests, as well as Republican lawmakers from energy-rich states.
'Step backward'
“Today’s executive order halting leasing is a step backward for environmental progress and is nothing more than an ‘import more oil’ policy that will weaken U.S. energy leadership, hamper the economic recovery and undermine national security,” American Petroleum Institute President & CEO Mike Sommers told reporters.
During the signing ceremony, Biden repeatedly stressed that his plans will create jobs overall, including work cleaning up abandoned wells, manufacturing zero-emission vehicles and strengthening the nation’s infrastructure. He rejected the characterizations that he’s immediately shutting off all fossil fuels.
“Let me be clear and I know this always comes up,” Biden said. “We’re not going to ban fracking. We’ll protect jobs and grow jobs.”
But that statement also highlighted the fact that some progressive groups want him to go further and faster.
Food & Water Watch Policy Director Mitch Jones, for example, called for the White House to end all drilling and fracking.
“To advance serious policies that actually address the climate crisis, the Biden administration must take aim at the source: the continued extraction and burning of fossil fuels,” Jones said in a statement. “New investments in clean energy and making environmental justice a priority are necessary measures, but they must be paired with serious plans to stop our deadly addiction to fossil fuels.”
Biden’s approach was welcomed, however, by a number of other environmental and renewable energy groups.
“Over the next decade, our nation’s transition to majority renewable energy will be a cornerstone of building back better,” American Clean Power Association CEO Heather Zichal said in a statement. “Justice for disadvantaged communities and welcoming legacy energy workers into the clean power workforce are vital aspects of the success of the clean energy transition.”
National