Army: Up to 25,000 National Guard troops in DC for Biden inauguration 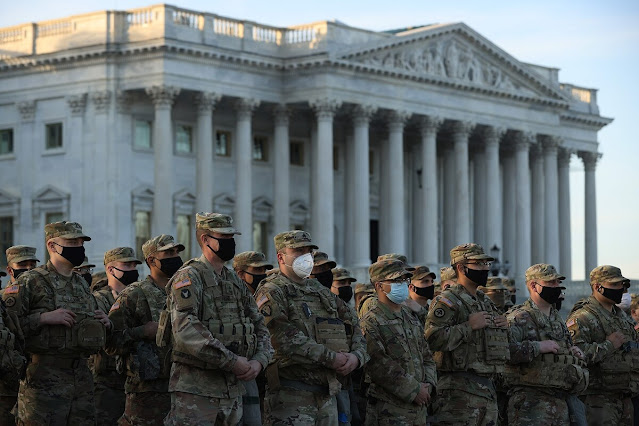 As many as 25,000 National Guard troops will be in Washington, D.C., for President-elect Joe Biden’s inauguration next week, the Army confirmed on Friday.
The Defense Department authorized up to 25,000 service members — an increase of 5,000 from numbers confirmed earlier this week — to support the “federal law enforcement mission and security preparations” in the inauguration, as led by the Secret Service, according to an Army statement.
“Our National Guard soldiers and airmen are set around the city to protect our nation's Capital,” National Guard Bureau Chief Army Gen. Daniel Hokanson said in the statement.
Every state and territory, as well as D.C. itself, will have Guardsmen deployed to the Beltway to support the Wednesday event following last week’s deadly attack on the Capitol, which forced a joint session of Congress to temporarily delay certifying Biden’s Electoral College victory.
Five people died in the Jan. 6 riot, including Capitol Police Officer Brian Sicknick.
Lawmakers have questioned the Pentagon’s speed in authorizing additional National Guard assistance during the deadly event.
Just 340 unarmed Guardsmen were elsewhere in D.C. providing traffic control on the day. And prior to the violent insurrection, local officials and the Pentagon had sought to minimize Guard involvement in responding to any protests after heavy criticism of the response to June’s racial justice protests.
Army officials have since steadily increased the number of Guardsmen authorized to assist in the inauguration, upping the number from 15,000 to 20,000 earlier this week. The final number will be set by the Secret Service.
In the meantime, nearly 7,000 Guardsmen have streamed into the region, as requested by the Secret Service, Capitol Police and U.S. Park Police, Hokanson said.
Photos taken at the Capitol beginning on Wednesday show hundreds of troops sleeping on the floor with their firearms at their sides.
The Army later explained that the soldiers in the photographs were in designated break areas between shifts and that it was “not where they are lodging when they are off-duty.”
The Guardsmen currently in the city have been sent from Arizona, Colorado, Delaware, Illinois, Maryland, New Jersey, New Mexico, New York, Ohio, Pennsylvania, Vermont, Virginia and Washington state, with additional support to come from Wisconsin, Nebraska, Oklahoma, New Mexico and Maine.
National