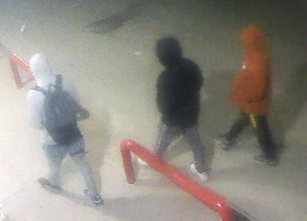 Amarillo Crime Stoppers is asking for help identifying three Aggravated Robbery suspects in this week’s, “Crime of the Week”.
In the early morning hours of January 19th, APD officers responded to a carjacking at the Toot’n Totum located at 2024 S. Washington. The victim had just arrived at the store when he was approached by 3 black males. The males pulled the victim from his vehicle and began to assault him.
After the assault the 3 suspects left in the victim’s vehicle. The vehicle is a silver 2004 Toyota 4-Runner that should display Texas license 1KYJL.
If you have any information on this crime or know who the suspects are, call Amarillo Crime Stoppers at 806-374-4400. You can also submit an anonymous tip online at amapolice.org or by using the P3 Tips App.
If your tip leads to an arrest you could earn a reward of up to $6,000. Remember to “Say It Here” and say it anonymously with Amarillo Crime Stoppers.
The supplemental reward in this case has been given by Toot’n Totum.
Local