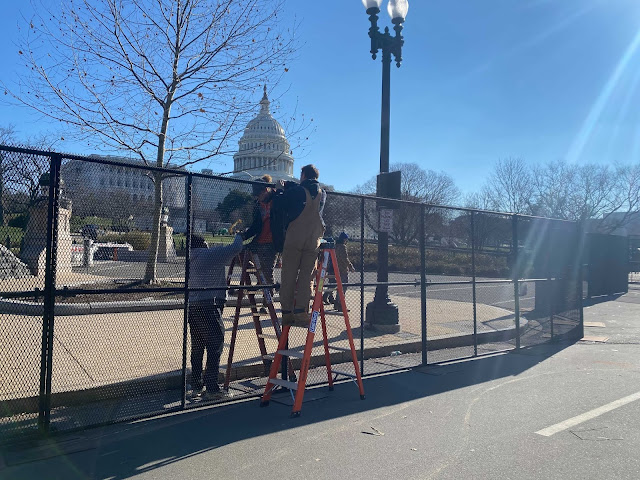 One of the quiet, underappreciated charms of Washington, D.C., — yes, believe it or not, it has some — is the relative accessibility of some of the physical locations most important to our system of government. It’s true that the White House and Capitol Hill have for years required security procedures actually to enter them. But getting pretty close to both hasn’t been that hard, as legions of tourists with cheesy photos could attest.
Well, you might want to turn that “is” into a “was.” Over the summer, after an unfortunate spectacle in the proximity of the White House, the entire area around the White House North Lawn, a span of several blocks, has been fenced off, and remains so (at least as of the last time I was there). And now, after the events of January 6, Capitol Hill has gotten similar treatment. Virtually the entire area, encompassing not just the Capitol itself but also congressional offices and buildings for the Library of Congress, is now behind a security fence, and staffed with a contingent of National Guard and other officers.
Some of this may be permanent on the Hill. Capitol Police acting chief Yogananda Pittman said in a statement Thursday that “in light of recent events, I can unequivocally say that vast improvements to the physical security infrastructure must be made to include permanent fencing, and the availability of ready, back-up forces in close proximity to the Capitol.”
Nothing is set in stone yet, and area politicians, including both Virginia senators and D.C.’s mayor, raised objections to permanent security measures of this nature. But fencing has already been up for nearly a month. And we’ve seen before how understandable security measures for an extraordinary situation can become a new normal. What that new normal may involve, and how it might affect not just the city but also the character of our government, remains to be seen.
Opinion