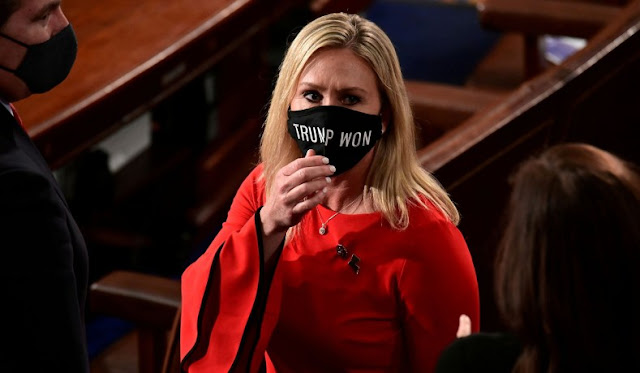 Georgia congresswoman Marjorie Taylor Greene is drawing scrutiny for a 2018 post on Facebook in which she suggested that laser beams from outer space may have started California wildfires and that the vice chairman of “Rothschild Inc” may have been involved in order to profit from the disaster.
For many years, anti-Semitic conspiracies have often featured the Rothschilds as shadowy figures responsible for any number of evils. While Greene takes a just-asking-questions approach in her 2018 Facebook post on the insane space-laser conspiracy theory, in a 2017 video she said she “definitely” would believe the Rothschilds were involved in funding the “global evil” of child sex-trafficking.
In a YouTube video that appears to have been originally uploaded in November 2017, Greene discusses the deranged and elaborate QAanon conspiracy theory for 30 minutes. “Q is a patriot. We know that for sure, but we do not know who Q is,” Greene said. “Many of the things that he has given clues about and talked about on 4chan and other forums have really proven to be true.”
While Greene says she isn’t sure about some of the claims made by Q — such as whether Robert Mueller is really working with Trump — she does express certainty about several of the conspiratorial claims. “There’s a once-in-a-lifetime opportunity to take this global cabal of Satan-worshipping pedophiles out, and I think we have the president to do it,” she says. At another point, Greene says that “Hillary Clinton is obviously involved” in Satan-worship.
About 15 minutes into the video, Greene notes that Q says that the Rothschilds, George Soros, and the Saudis are “the puppetmasters that fund this global evil,” and she adds: “I definitely would believe that.”
The 30-minute QAnon rant was deleted from YouTube, but a copy may be viewed here.
Greene’s spokesman told the New York Times this week that Greene “doesn’t have anything to do with” the QAnon conspiracy theory and “thinks it’s disinformation.”
Greene’s extreme and conspiratorial comments go far beyond QAnon. In 2018, she said “there’s never any evidence shown” that an airplane crashed into the Pentagon on 9/11.
She has also promoted conspiracy theories that school-shootings were staged, the Washington Post reports:
One commenter called the Parkland shooting “fake,” adding that “none of the School shootings were real or done by the ones who were supposedly arrested for them.” The user spread other conspiracy theories and called the Sandy Hook massacre — in which 20 children and six staff members at an elementary school were fatally shot in 2012 — a “STAGGED SHOOTING.”
Greene liked the post and replied, “That’s all true.”
In a deleted Facebook video, Greene told a crowd: “It’s a crime punishable by death is what treason is. Nancy Pelosi is guilty of treason.” Earlier this week, CNN reported that in 2019 Greene’s Facebook account “liked” a “comment that said ‘a bullet to the head would be quicker’ to remove House Speaker Nancy Pelosi.” Greene responded to the CNN report by claiming that someone else operating her Facebook account liked the comment about killing Pelosi: “Over the years, I’ve had teams of people manage my pages. Many posts have been liked. Many posts have been shared. Some did not represent my views. Especially the ones that CNN is about to spread across the internet,” she wrote.
House GOP Leader Kevin McCarthy will reportedly meet with Greene this coming week. On Saturday, Greene tweeted that she talked to Donald Trump and that she has support from the former president: “I had a GREAT call with my all time favorite POTUS, President Trump!  I’m so grateful for his support.” After Greene defeated a Republican neurosurgeon in the primary runoff election in August, Trump hailed Greene on Twitter as a “future Republican Star.”
Opinion