A few thoughts on invoking the 25th Amendment to remove Trump 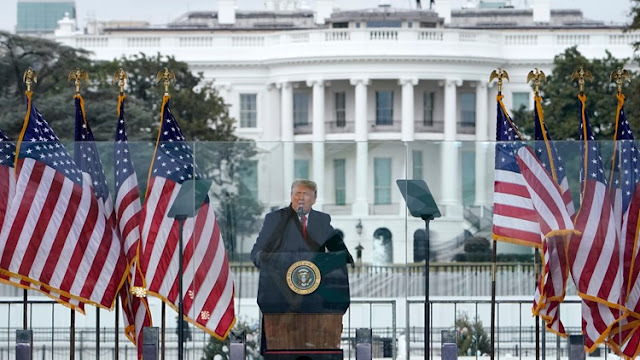 As if the footage of rioters waving Trump flags and storming the U.S. Capitol were not jarring enough, multiple reports Wednesday indicated that members of President Trump’s Cabinet were discussing the unprecedented step of invoking Section 4 of the 25th Amendment.
Section 4 empowers the vice president and a majority of the Cabinet to declare a president “unable to discharge the powers and duties of his office,” at which point the vice president steps in temporarily as acting president.
We have no way of knowing how serious any such discussions were, or how many of the Cabinet’s 15 members might have been involved. It is unclear if the discussion was prompted by what the president had been doing (inciting rioters), or had not been doing (governing). But Section 4 is designed primarily to work against presidents who cannot do anything, not against presidents who are all too able to do bad things — the latter is fodder for the impeachment process.
So might Section 4 be a realistic option? Perhaps, if the situation in Washington, D.C., spirals further out of control between now and Jan. 20. But Section 4 sets that bar high.
Section 4 divides “unable” presidents into two categories. When presidents are incapacitated — when they cannot even contest the action — Section 4 transfers power to the vice president swiftly and simply. But when presidents are up and around (as Trump is) and can assert that “no inability exists,” Section 4 stacks the deck very heavily in the president’s favor. When the president objects, he will eventually retake his powers unless the vice president and Cabinet are supported by two-thirds majorities in both the House and Senate within 21 days. Even then, the president can keep trying to return, forcing new votes.
This design stands in contrast to the impeachment process. Impeachment does not require the involvement of the vice president or Cabinet. It requires only a simple majority in the House, not the two-thirds needed for Section 4 in a contested case. And unlike Section 4 with its unlimited do-overs, a Senate conviction after impeachment is permanent. Section 4’s framers did this on purpose; they did not want officials using Section 4 to make end runs around the impeachment process. If a president is doing bad things but the congressional votes are not there to impeach and remove him, then the even-larger number of congressional votes needed to sustain a Section 4 action will not be there either.
But impeachment in the House and trial in the Senate can take a long time. Trump eventually issued a lukewarm call for his followers to “stay peaceful,” sandwiched between his continued accusations about the election. But imagine a president being bolder in his incitement, calling for his followers to step up their raids on the Capitol rather than to “go home.” If Congress wanted to stop him, it would take time for the House to convene (presumably somewhere else), and even more time to debate and vote. A Senate trial would take still longer. In the meantime, the president would retain all of his powers, potentially wreaking all kinds of havoc.
Section 4, by contrast, could be executed in mere minutes. As a result, Section 4 is tempting to use against a president who is not incapacitated, but is unhinged (a form, arguably, of being “unable”), and is threatening irreparable harm that needs to be stopped immediately. Used in conjunction with impeachment — as a way to suspend the president pending a House investigation and Senate trial — Section 4 could be a valuable tool. More directly relevant to the current situation, because the president’s term ends in under 21 days, the House and Senate could simply run out the clock by not voting on the Section 4 action at all.
Section 4 is not to be used lightly. Its framers purposely vested the power to invoke it in those closest to the president, in part because of their natural reluctance to use it. It has never been invoked, but Trump’s conduct this week fueled an unprecedented assault on the basic foundations of our republic.
Even though Vice President Pence and the Cabinet have not invoked Section 4, it was not inappropriate to talk about it as the Capitol was being overrun. If nothing else, the presence of Section 4 should act as a deterrent on a president who might otherwise be in the mood to do something even crazier in his final days in office.
Opinion