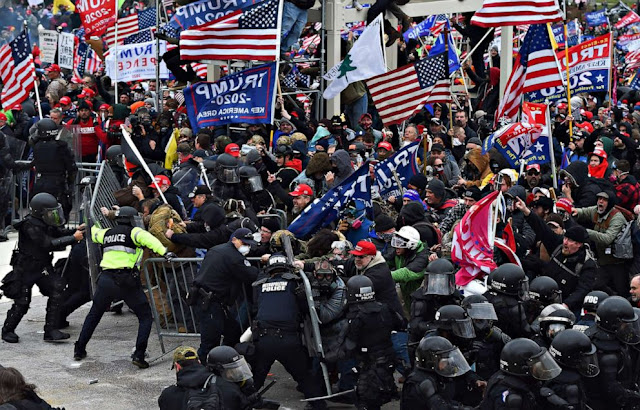 Law enforcement officials have opened at least 25 domestic terrorism cases following the riot that broke out at the U.S. Capitol building last week amid pro-Trump demonstrations in Washington, D.C.
Rep. Jason Crow (D-Colo.) confirmed on Twitter on Sunday that Secretary of the Army Ryan McCarthy said during a call that “at least 25 domestic terrorism cases have been opened as a result of the assault on the Capitol,” according to Crow’s notes from the conversation.
Moments ago, I spoke with Secretary of the Army Ryan McCarthy about the military response to the January 6 Capitol attack and ongoing security measures.
McCarthy “indicated that the (Defense Department) is aware of further possible threats posed by would-be terrorists in the days up to and including Inauguration Day and is working with local and federal law enforcement to coordinate security preparations,” Crow also wrote.
According to Crow’s account of the call, the Department of Defense made “several” attempts to offer National Guard resources to the Washington, D.C. Metropolitan Police and U.S. Capitol Police before the mob breached the Capitol building on Jan. 6. The department “repeatedly were told no additional resources needed.”
The Democratic lawmaker also said that “due to a lack of coordination and preparation, there was not a functioning operations center in the Pentagon to manage (National Guard) presence and direct additional resources” amid the riot.
Crow and Rep. Ruben Gallego (D-Ariz.) on Saturday sent a letter to McCarthy requesting a briefing for members of the House Armed Services Committee on the Department of Defense and National Guard’s response to the riot, in addition to preparation for President-elect Joe Biden’s inauguration next week.
Washington, D.C., Mayor Muriel Bowser (D) on Sunday called on the Department of Homeland Security to take additional steps to ensure that the nation’s capital is secure ahead of the inauguration.
Bowser has called for an extension of the special security period surrounding the inauguration, the declaration of a pre-disaster zone, and more.
Maryland Gov. Larry Hogan on Sunday told CNN’s State of the Union that the Maryland National Guard quickly mobilized after hearing of the U.S. Capitol breach, but he was unable to get permission to send troops into Washington D.C. for “quite some time.”
Governors are required to receive permission from the Defense Department to send troops into the nation’s capital.
"So, our Guard mobilized and was ready. But we couldn't actually cross over the border into D.C. without the OK. And that was quite some time. We kept running it up the flagpole, our generals talking to the National Guard generals. And eventually, I got a call from Ryan McCarthy, the secretary of the Army, asking if we could come into the city. But we had already been mobilizing," Hogan said.
National