WP and others rushing to defend Dems from mockery and criticism 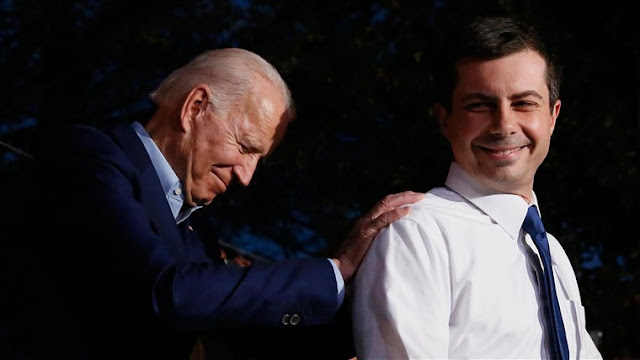 The Washington Post op-ed page chose to run a column by Lisa Bonos — who writes about dating and relationships for the newspaper’s features department — declaring, “Pete Buttigieg is right. Airports are romantic.”
Maybe you find airports romantic, maybe you don’t. If you’re with the person you love, just about any place on earth can be romantic, even the Department of Motor Vehicles. Most of the time, airports are crowded, stressful, annoying, with a cacophony of announcements, and you always seem to end up behind somebody attempting to litigate a hostile takeover of United Airlines through the gate agent because her flight is delayed. Yes, she needs to speak to a manager. She has a lot of frequent-flyer miles, you see, and her preferred Emerald Star Platinum Advantage Reward Status should outrank the fog surrounding the airport.
But that’s not really the point.
Buttigieg is, like many other Biden cabinet nominees, something of an odd choice with limited direct experience in the issue he will be expected to manage. (South Bend, Ind., has a bus system with about 60 buses.) Buttigieg had to stretch to contend he’s a natural fit for the job, proclaiming “a personal love of transportation ever since childhood,” that “transportation makes the American dream possible,” and that, “in this administration, I will at best aspire to be the second biggest train enthusiast around.” Apparently Buttigieg’s primary qualifications for the job are that he has seen and used many forms of transportation.
Fine. Whatever. Every presidential candidate who ends up getting a lesser-covered cabinet post has to grin and pretend to be really excited about his upcoming duties, as if attending route-management meetings of the U.S. Maritime Administration is what the aspiring commander in chief really wanted all along.
Even in a generally pro-Buttigieg piece, Henry Grabar of Slate writes, “Is Pete Buttigieg the most deserving person for this job? Emphatically not. Does he know the most about transit? I’m not even sure he knows the most about transit among former Slate bloggers. It’s a fitting turn for a man who, to his enemies, represents how America’s failing institutions reward shiny credentials and unprincipled striving above experience or demonstrated success.” Anyone with eyes can see this is Buttigieg’s consolation prize for dropping out and endorsing Biden at a key moment during the primary.
Buttigieg made a comment that some people found silly. They found it silly because it is silly. It is as silly as informing us that one of Buttigieg’s favorite board games is “Ticket to Ride.”
But for some reason, the mockery of Buttigieg’s airports comment made the op-ed page of the Washington Post swing into action. The good name of the former mayor of South Bend had to be defended! His assessment of the romanticism of airports had to be defended and validated! I strongly suspect that if Elaine Chao had declared in her announcement ceremony, “Airports are romantic,” the Post would not rush out to run a column defending her assessment. It would be cited as further evidence that Trump cabinet appointees are out-of-touch with the reality of what they’re supposed to manage and kind of weird.
Every day, lots of writers for big media institutions wake up with one adamant belief: that Democrats are the good guys and always right, and that Republicans are the bad guys and always wrong. Many big media institutions will rush to defend Democrats from mere mockery, never mind serious criticism.
Opinion