What the hell happened in Nashville? 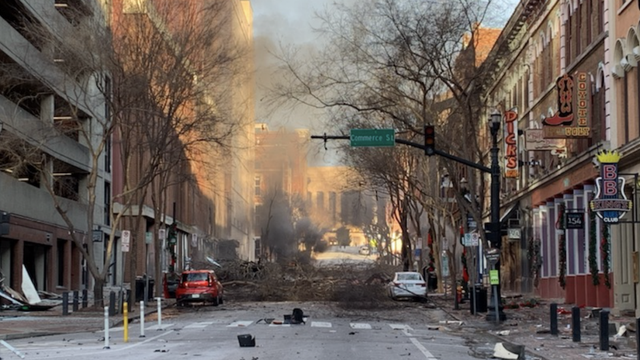 The Christmas Day explosion in downtown Nashville wasn’t just frightening terrorism; it was creepy, with an almost cinematic sense of timing and drama.
The suicide bomber either used gunshots or audio of gunshots to attract attention shortly after 5 a.m. on Christmas morning. A loudspeaker on the recreational vehicle started playing a woman’s voice declaring and repeating, “This area must be evacuated now. If you can hear this message, evacuate now,” in a dispassionate tone fit for an airport terminal-change announcement. In between, the speakers played “Downtown” by Petula Clark from 1964. This was some Joker-level theatrics.
And then at 6:29 a.m., the bomb detonated, injuring three people. Considering the power of the bomb and the scale of the physical damage to the surrounding buildings, it was a near-miracle that no one was killed.
Law enforcement identified the bomber as Anthony Quinn Warner, a local “self-employed computer guru,” and declared he died in the explosion; his identity was confirmed through DNA testing. The FBI and local law enforcement have no other suspects. At this hour, the explosion appears to be a dramatically high-profile suicide.
Here’s what’s spectacularly odd: This might be the most successful attack on our telecommunications infrastructure ever, and it wasn’t by a terrorist group. In fact, it’s not clear that the AT&T building was deliberately targeted.
Despite massive destruction to 41 buildings, no one else was killed in the explosion. Officers helped evacuate nearby residents from several apartments.
The RV was parked outside of an AT&T facility, though authorities have not said whether they believe the telecommunications company may have been a target.
The blast caused extensive damage to phone and internet coverage throughout the region, causing communication blackouts for 911 centers in surrounding counties, leaving customers throughout the state without service and exposing vulnerabilities in infrastructure.
The bomber apparently did not intend to kill innocent people, but he managed to put together a bomb powerful enough to kill many people — and the bomber could never know for certain that no innocent people or police would be within the blast radius. And of course, if you knock out 911 service, you put many lives at risk — an ambulance might not get there in time for someone who’s suffering a heart attack or had a car accident or the fire department won’t make it to a blaze. At this hour, no one has found any manifesto or suicide note from the bomber. This took elaborate and meticulous planning, and there are some signs the bomber had put his affairs in order before launching his attack.
I said above that this was probably the most successful attack on our telecommunications infrastructure ever. It reminded me, however, of another attack that was less successful — but almost as mysterious — back in 2013:
The attack began just before 1 a.m. on April 16 last year, when someone slipped into an underground vault not far from a busy freeway and cut telephone cables.
Within half an hour, snipers opened fire on a nearby electrical substation. Shooting for 19 minutes, they surgically knocked out 17 giant transformers that funnel power to Silicon Valley.
A minute before a police car arrived, the shooters disappeared into the night.
To avoid a blackout, electric-grid officials rerouted power around the site and asked power plants in Silicon Valley to produce more electricity. But it took utility workers 27 days to make repairs and bring the substation back to life.
Nobody has been arrested or charged in the attack at PG&E Corp.’s Metcalf transmission substation. It is an incident of which few Americans are aware. But one former federal regulator is calling it a terrorist act that, if it were widely replicated across the country, could take down the U.S. electric grid and black out much of the country.
The attack was “the most significant incident of domestic terrorism involving the grid that has ever occurred” in the U.S., said Jon Wellinghoff, who was chairman of the Federal Energy Regulatory Commission at the time.
For reasons the FBI never disclosed, the bureau did not believe the attack on the substation was a terrorist attack. No one was ever arrested, but in 2015, Caitlin Durkovich, assistant secretary for infrastructure protection at the Department of Homeland Security declared at a conference, “While we have not yet identified the shooter, there’s some indication it was an insider.”
In the aftermath of the California attack, the Federal Energy Regulatory Commission required power companies to upgrade their physical security. But it is very difficult to protect critical infrastructure in an urban environment from a bomb as powerful as the one in that RV.
Opinion