US announces weapons sales with six nations worth combined $1.55B 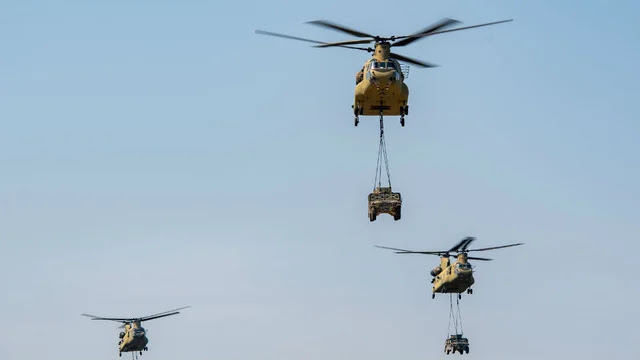 The State Department on Tuesday announced a six new weapons sales potentially worth a combined $1.55 billion, pushing the deals forward ahead of the transition to the Biden administration next month.
The foreign military sales include torpedoes for Brazil, vehicles for Croatia and Lebanon, upgrades for Canadian aircraft, training for the Saudi military and weapons systems for South Korean ships, according to the Defense Security Cooperation Agency (DSCA).
Congress, which was notified of the sales on Monday, now has a 30-day window to block any of the deals if it wants to.
The largest of the deals would go to NATO ally Croatia, which wants to refurbish 76 M2A2 Bradley Fighting Vehicles for a potential $757 million. The country currently uses models from as far back as Operation Desert Storm in the early 1990s and wants to upgrade machine guns, missiles, radios and armor, among other parts of the vehicles.
The Saudi Arabia deal is worth $350 million in technical assistance and advisory support for the kingdom's Ministry of Defense over five years. The U.S. Military Training Mission to Saudi Arabia (USMTM), which is based in Riyadh and includes servicemembers and U.S. contractors who help train the Saudi military, would provide the services.
The package would include “Pay and allowances for U.S. Military, U.S. Government, and Foreign National staff members; USMTM communications support costs; local contracting costs; construction and renovation costs of housing area; transportation costs; U.S. Mail services support costs; dependent education (grades K through 12); administrative costs; temporary duty costs for USMTM personnel,” and any future transition costs to move USMTM to a proposed new housing location in Saudi Arabia, the announcement said.
Canada, meanwhile, wants to upgrade five C-17 transport aircraft for an estimated $275 million, and Brazil seeks to buy $70 million worth of conversion kits to alter existing MK 46 Mod 5 A(S) torpedoes to MK 54 Mod 0 lightweight torpedoes. The weapons would be used on the country’s Seahawk helicopters and its surface ships, according to the DSCA.
And a possible $55.5 million deal would give Lebanon 300 M1152 High Mobility Multi-purpose Wheeled Vehicles (HMMWV). The country currently has more than 1,000 HMMWVs of various designs to “move troops and supplies around the country to counter violent extremist organizations and to secure its border," the DSCA said in a statement.
Rounding out the proposed sales is a deal for South Korea to buy two anti-missile defense weapon systems for its ships for $39 million.
The Trump administration since October has approved more than 20 foreign weapons sales worth tens of billions of dollars, the most high-profile being a $23 billion package for the United Arab Emirates in November. Lawmakers have already moved to block that plan to sell fighter jets, armed drones, missiles and bombs to the kingdom.
World