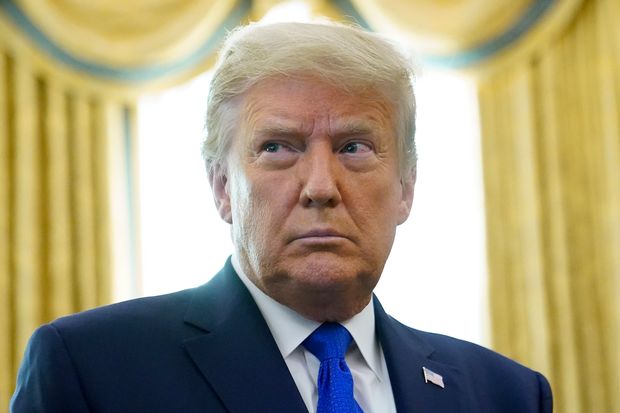 President Trump followed through Wednesday on his threat to veto a massive annual defense policy bill, setting up what could be the first and only veto override of his presidency.
Congress passed the fiscal year 2021 National Defense Authorization Act (NDAA) earlier this month with more than the two-thirds majority needed to override a veto, though it is unclear how many Republicans will buck the president in an override vote.
Trump objected to the $740 billion policy legislation because it did not include a provision repealing Section 230 of the Communications Decency Act, a law that provides a legal shield to tech companies like Twitter and Facebook.
Trump also threatened to veto the legislation because it included a provision requiring Confederate military bases to be renamed within three years and has recently complained that he views the bill as weak on China, despite a litany of provisions aimed specifically at Beijing.
Trump, who had 10 days excluding Sundays to act after Congress sent him the bill, waited until the last day he could to veto it.
Both the Senate and House will now need to vote to override Trump’s veto to enact the massive bill, which outlines Pentagon policy for the coming year and typically attracts broad bipartisan support. The bill already passed the Senate in an 84-13 vote and the House in a 355-78 vote.
The bill, which has become law for 59 years in a row, is considered must-pass because it authorizes a host of special pay and bonuses for troops, military construction projects, training programs and other vital operations.
Congress must override the veto before noon on Jan. 3, when the 117th Congress will be sworn-in. If Congress fails to override the veto by then, lawmakers would need to start from scratch on the bill.
The House plans to hold its veto override vote Monday, in a rare post-Christmas session.
If the House successfully overrides Trump, the Senate is planning to come back the following day. But it could still be days after that before the upper chamber holds a final override vote if senators who support Trump’s veto drag out procedural hurdles. Senators have suggested the override vote could happen the morning of Jan. 3, just before the new Congress takes office.
Sen. Rand Paul (R-Ky.), who briefly held up passage of the NDAA earlier this month, indicated Monday he could similarly delay an override vote.
“I very much am opposed to the Afghan war, and I’ve told them I’ll come back to try to prevent them from easily overriding the president’s veto,” Paul told reporters.
Trump’s opposition to the legislation caused tensions between the president and Senate Republicans in the waning weeks of his presidency.
"My intention was and is to ensure the Senate continues fulfilling our obligation to the men and women of our armed forces. I hope the president will not veto this bill," Senate Majority Leader Mitch McConnell (R-Ky.) said from the Senate floor this week.
Republicans indicated earlier that there had been efforts to persuade Trump to back down from his veto threat, and they were hoping a strong enough vote would convince him to sign the bill.
But they ultimately were unsuccessful.
Trump’s decision to go through with the veto is likely to further exacerbate tensions between the White House and Capitol Hill at a time when Trump’s refusal to concede to President-elect Joe Biden and effort to overturn the election results has divided Republicans.
Trump has also recently put Republicans in a difficult position by objecting to the $2.3 trillion coronavirus relief and government funding package passed by both chambers earlier this week after months of stop-and-start negotiations.
Some Republicans who voted to pass the NDAA, such as House Majority Leader Kevin McCarthy (R-Calif.), have said they would not support a veto override.
On the other hand, some Democrats who voted against the bill have said they would switch their votes to overcome Trump’s veto.
National