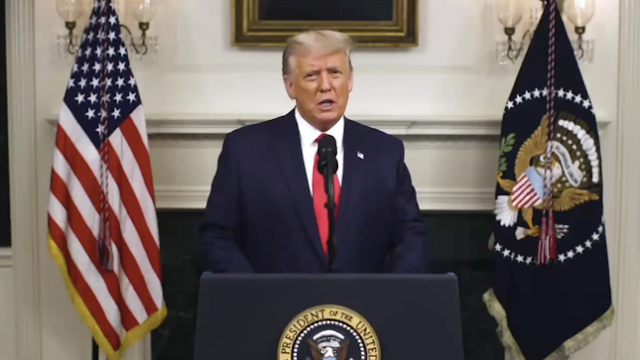 President Trump ranted for 46 minutes about voter fraud in a pre-recorded speech he posted on Facebook on Wednesday, making unsubstantiated claims about the election being stolen from him and wrongly claiming that he’d triumphed in key battleground states he lost.
The president’s speech reiterated many of the conspiracy theories and false election claims he’s been making over Twitter in recent days, as he questioned how President-elect Joe Biden could have earned more votes when some down-ballot Republicans outperformed expectations.
Trump did not provide any evidence for his claims, but said his campaign had produced all of the proof necessary to overturn the results in the dozens of court cases it has lost since Election Day.
The president invoked a conspiracy theory about voting machines switching votes from Trump to Biden; said “millions” of illegal votes were cast in the swing states; questioned how batches of reported vote totals from liberal areas could have gone in large numbers for Biden; and said that vote counting should have stopped on election night before mail ballots were counted.
“If we don’t root out the tremendous and horrible fraud that’s taken place, then we don’t have a country anymore,” Trump said.
The president is increasingly isolated in his refusal to accept the outcome of the election.
Attorney General Bill Barr said Tuesday that there is no evidence of systemic corruption of the kind that would alter the outcome. Barr and other Republican lawyers say some voter fraud occurs in every election, but they have seen no evidence to back up the wild claims of systemic corruption made by the president and his allies.
The Trump campaign has lost case after case in the courts with arguments aimed at nullifying the vote in Democratic strongholds.
Elected Republicans officials in Georgia, where Trump became the first GOP presidential candidate to lose since 1992, are being threatened with violence and calling on the president to tone down his rhetoric.
A small cohort of loosely affiliated lawyers, led by Trump’s personal attorney Rudy Giuliani and conservative activists like Sidney Powell and Lin Wood, are holding their own rallies to gin up suspicions and anger among the president’s base of supporters.
Trump has authorized his General Services Administrator to allow Biden to begin the transition process.
But there are no signs that the president will ever accept the outcome of the election or seek to unify a divided country on his way out.
“We’ll show it, and hopefully the courts in particular the Supreme Court of the United States will see it and respect fully hopefully do what’s right for the country,” Trump said. “Our country cannot live with this kind of election.”
In his video, Trump sought to raise suspicions about mail voting, saying that Democrats took advantage of the pandemic to mail out millions of ballots that were then illegally cast as votes for Biden by using the names of dead people or illegal immigrants.
“This colossal expansion of mail voting opened the flood gates to massive fraud,” Trump said.
“Dramatically eroding the integrity of the elections was the Democrats number one priority for a simple reason – they wanted to steal the 2020 election,” he added. “All of the Democratic efforts to expand mail in balloting laid the groundwork for the systemic fraud in this election.”
The president said it would be impossible for Biden have overcome deficits he faced in a handful of states after in-person ballots were counted, even though Biden encouraged his voters to vote by mail and Trump had warned Republicans against mail balloting in the run-up to Election Day.
Trump said the vote should be thrown out in liberal Democratic cities because Republican poll watchers were shut out or because some people claimed to have witnessed what they believed to be irregularities.
He said that there were “dozens” of counties in swing states where there were more votes than people, which is false, and that scores of Republicans showed up to vote but were told they couldn’t because someone else had used their mail ballot.
And the president repeatedly held up charts showing spikes in the vote for Biden at late hours of the night or early in the morning, saying that the reported vote totals couldn’t possibly be real.
The president said he couldn’t understand how some down-ballot Republicans could win their elections but he could not win his own.
Trump said this must be because of the Dominion voting machines, which have been the subject of conspiracy theories promoted by Powell and others who say the machines were hijacked by communists.
“Under my lead, the Republicans won nearly every statehouse in the United States, which they weren’t expected to do,” Trump said.
“It’s statistically impossible, that the person, me, that led the charge, lost,” he added.
National