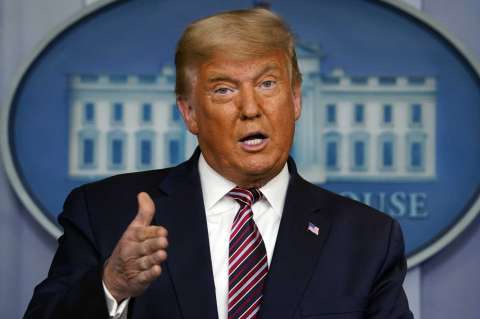 President Trump has secured at least $150 million in funding since last month's election while encouraging voters to shell out donations in support of unproven claims that the election was stolen from him, according to multiple reports that noted most of the funds will go toward other political endeavors.
Trump's campaign increased its efforts to solicit donations after the election to fund legal efforts aimed at overturning the results. Though the pitches stated that donations were needed for an “Election Defense Fund,” nearly 75 percent of the money collected could end up going toward a political action committee, The New York Times reported.
Almost $5,000 of a donor's contribution will be allotted to Trump’s new PAC, Save America, which could help fund the president's future political efforts, with the remainder going toward recount and other efforts to overturn the 2020 vote, according to the Times.
“The average donor who gives in response to Trump’s appeal for funds to ‘stop the fraud’ likely doesn’t realize that their money is actually retiring Trump’s debt or funding his leadership PAC,"  Brendan Fischer, the director for federal regulatory work at the Campaign Legal Center, which supports restrictions on the role of money in politics, told The Washington Post. “Small donors who give to Trump thinking they are financing an ‘official election defense fund’ are in fact helping pay down the Trump campaign’s debt or funding his post-presidential political operation."
Save America was created in Mid-November and the money it receives could pay for staff and travel in the future. Twenty-five percent of a donor's contribution to Trump's campaign will also be allocated to the Republican National Committee, the Times noted.
The newspaper reported that the figure that Trump has collected post-election has reached closer to $170 million. Most of those funds were reportedly raised within a four-week period.
The Trump campaign raised and spent a total of more than $1 billion during the election cycle and reportedly used some of the money to pay down debt in the past.
National