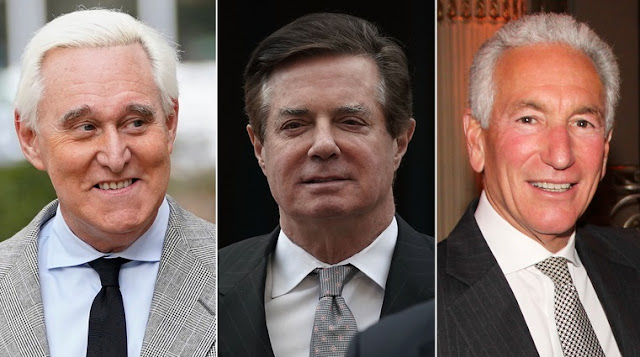 President Trump on Wednesday pardoned Roger Stone and Paul Manafort, two associates convicted as part of former special counsel Robert Mueller's Russia investigation.
Trump also granted a pardon to Charles Kushner, the father of his son-in-law and senior adviser Jared Kushner.
It marked the second consecutive day Trump pardoned allies and those with White House connections. The announcement came shortly after Trump landed in Palm Beach, Fla., for his winter vacation.
Stone, a longtime Trump associate, was convicted in November 2019 by a jury in Washington, D.C., of lying to Congress in connection with its separate investigation into Russian interference, witness tampering and obstructing an official proceeding.
Trump commuted Stone's sentence in July days before he was set to report to prison. The full pardon came with a note from press secretary Kayleigh McEnany that stated Stone "was treated very unfairly."
Manafort, who served as the chairman of Trump's 2016 campaign, was convicted in 2018 on bank fraud and tax charges. He was sentenced to more than seven years in prison. Manafort was released to home confinement earlier this year amid the coronavirus pandemic.
Trump issued Manafort a "full and complete pardon," with McEnany arguing that his convictions were "premised on the Russian collusion hoax."
The Manhattan district attorney is still appealing its case against Manafort.
"This action underscores the urgent need to hold Mr. Manafort accountable for his crimes against the People of New York as alleged in our indictment, and we will continue to pursue our appellate remedies," Danny Frost, director of communications for District Attorney Cy Vance, said in a statement.
By pardoning Stone and Manafort, Trump has essentially undone the criminal ramifications for his associates who were ensnared in Mueller's investigation into Russian interference in the 2016 election.
Trump railed against the investigation for much of his first two years in office. He had previously pardoned Michael Flynn, who pleaded guilty to lying to the FBI as part of the probe, and on Tuesday pardoned two others caught up in the investigation.
The president also pardoned Charles Kushner, 66, who pleaded guilty in 2004 to charges of tax evasion, lying to the Federal Election Commission and retaliating against a federal witness. He served two years in prison before being released.
Former New Jersey Gov. Chris Christie (R), an informal adviser to the president, prosecuted the case and last year described it as "one of the most loathsome, disgusting crimes that I prosecuted."
But Trump has overwhelmingly used his pardon powers to benefit those who support him or those with connections to the White House rather than going through the traditional process of reviewing cases through the Office of the Pardon Attorney.
The three pardons of close political associates were the headliners among a batch of more than two dozen pardons and three sentence commutations announced Wednesday. The president also pardoned Margaret Hunter, the wife of ex-Rep. Duncan Hunter (R-Calif.), whom the president pardoned a day earlier.
Other pardons announced Wednesday included one for former Rep. Mark Siljander (R-Mich.), who served a year in prison for obstruction of justice and failing to register under the Foreign Agents Registration Act.
He also pardoned Topeka Sam at the recommendation of Alice Johnson, a criminal justice reform advocate who was granted clemency earlier in Trump's term. Sam served three years in prison after pleading guilty to one count of conspiracy to possess and distribute cocaine.
National