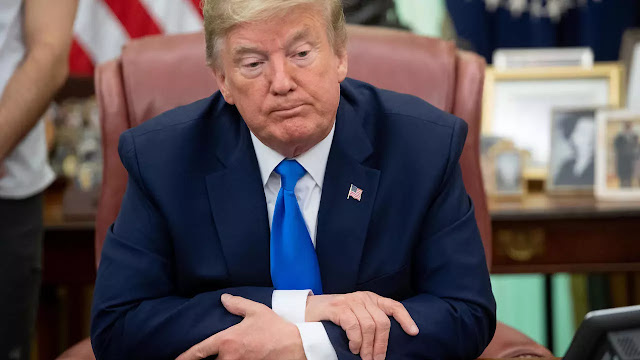 President Donald Trump, who has threatened to veto the fiscal 2021 defense authorization bill, has until Dec. 23 to either do so or sign it into law, congressional aides said Monday.
The Senate cleared the $731.6 billion measure on Dec. 11, and it was quickly enrolled and delivered to the White House the next day, the aides said.
According to the Constitution, a president has 10 days, excluding Sundays, to sign or veto a bill, setting up the Dec. 23 deadline for Trump’s decision.
If Congress were to adjourn during the 10 days, the bill could get scuttled in a so-called pocket veto, but Congress is expected to take procedural steps to avoid that scenario. House Majority Leader Steny H. Hoyer has said he would not allow a pocket veto to happen.
Trump has threatened to veto the measure, known as the NDAA, because it would not repeal legal protections for social media companies and because it would require the Pentagon to rename military bases named after Confederate soldiers.
Trump added a third objection to the NDAA out of the blue in a tweet on Sunday, a day after receiving the 4,517-page bill.
“THE BIGGEST WINNER OF OUR NEW DEFENSE BILL IS CHINA!,” he tweeted. “I WILL VETO!”
Rhode Island Sen. Jack Reed, the top Democrat on the Armed Services Committee, shot back quickly in a statement Sunday.
“This latest veto threat is further proof that he cares more about himself than our troops and the safety of the American people,” Reed said of Trump. “Now Congress must come together on a bipartisan basis and override this senseless veto and provide for the common defense.”
Clock starts ticking
If Trump takes most or all of the 10 days he is allowed and vetoes the bill any time after this week, lawmakers will probably have already left town.
They expect to all but wrap up this session by Dec. 18, when congressional leaders hope to replace a stopgap federal spending bill that expires on that day with a $1.4 trillion package of newly minted appropriations bills for fiscal 2021.
Hoyer has indicated he would bring lawmakers back to town to vote to override an NDAA veto before the Jan. 3 scheduled start of the new Congress.
Senate Majority Leader Mitch McConnell has yet to commit to the same plan.
The conference report was adopted by both chambers in an overwhelming and bipartisan fashion — 83-14 in the Senate and 335-78 in the House.
In the event of a veto override vote, though, it remains to be seen how many Republicans would switch their positions and decline to override a veto.
The NDAA would authorize spending on a number of programs of importance to military families that are slated to go into effect on Jan. 1. These include special pay and bonuses as well as construction work on military housing and other facilities — programs that must be both authorized and appropriated.
The conference report also would set in motion a number of new policies. It would, for example, create a Pacific Deterrence Initiative to focus U.S. military programs aimed at deterring China. And the conference report contains language that could forestall any attempt by Trump to move U.S. forces out of Germany in his final days in office.
National