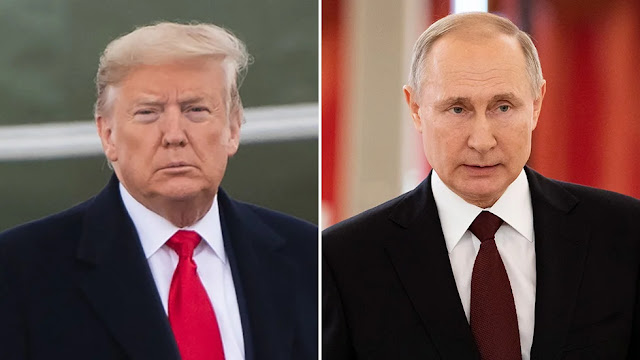 President Trump on Saturday downplayed the impact of a sprawling hack on a litany of government agencies while questioning officials' conclusion that Russia was behind the attack.
Trump used his first public comments on the cyber intrusion to dismiss the severity of the hack while asserting that the media was playing it up to hurt him. He also questioned who perpetrated it, despite officials such as Secretary of State Mike Pompeo saying that Russia was to blame for the attack.
The president's comments, issued in a pair of tweets, directly contradicted government officials and outside experts who said the attack that hit the departments of Energy, Homeland Security, State and Treasury, among others, was one of the broadest cyberattacks in recent memory.
“The Cyber Hack is far greater in the Fake News Media than in actuality. I have been fully briefed and everything is well under control. Russia, Russia, Russia is the priority chant when anything happens because Lamestream is, for mostly financial reasons, petrified of discussing the possibility that it may be China (it may!),” Trump tweeted.
“There could also have been a hit on our ridiculous voting machines during the election, which is now obvious that I won big, making it an even more corrupted embarrassment for the USA,” he added, echoing his claims that widespread voter fraud and irregularities kept him from winning a second term.
The tweets flew in the face of recent comments from high-ranking officials such as Pompeo who said Friday evening that Russia was behind the intrusion.
"I can’t say much more, as we’re still unpacking precisely what it is, and I’m sure some of it will remain classified. But suffice it to say there was a significant effort to use a piece of third-party software to essentially embed code inside of U.S. government systems and it now appears systems of private companies and companies and governments across the world as well," Pompeo said on "The Mark Levin Show."
"This was a very significant effort, and I think it’s the case that now we can say pretty clearly that it was the Russians that engaged in this activity," he added.
Pompeo was the first major government official to publicly blame Russia, though members of Congress and outside experts had widely concluded that Moscow was behind the intrusion.
The hack, which entered government systems through targeted third-party software contractor SolarWinds, blindsided the U.S. government and laid bare both cyber vulnerabilities throughout the government’s systems and Russia’s aggressive posture in cyberspace.
“We shouldn’t have been surprised, the Russians are very sophisticated, they are very dedicated and relentless, and this appeared to be a soft target they were able to exploit,” Christopher Painter, the former State Department cybersecurity coordinator under both the Trump and Obama administrations, said on Friday.
The expansive hack led lawmakers to call on the White House to take action, including specifically condemning the intrusion and signing the annual defense policy bill, which includes several cybersecurity provisions, but Trump has threatened to veto over other issues.
The administration had already organized a cyber coordination group composed of the Cybersecurity and Infrastructure Security Agency, the FBI and the Office of the Director of National Intelligence to respond to the hack, but at least one lawmaker hit Trump over his silence over the attack.
"I think the White House needs to say something aggressive about what happened. This is almost as if you had a Russian bomber flying undetected over the country, including over the nation's capital, and not to respond in a setting like that is really stunning," Sen. Mitt Romney (R-Utah) said in an interview this week.
The Saturday morning remarks from Trump followed a pattern of him being wary of criticizing Moscow over cyber threats. The president notably refused to accept that Moscow interfered in the 2016 election to boost his campaign, at times dismissing the intelligence community’s overwhelming assessment that Russian President Vladimir Putin was behind the plot.
It is unclear what kind of response the administration will launch, particularly as Trump focuses his remaining time in office railing against his election loss, but outside voices have called on the White House to launch a counterstrike to deter future Russian hacks.
“The top priority has got to be, if we determine it’s the Russians, that’s where the information tends to point, what the retaliation is going to be,” John Bolton, Trump’s former national security adviser, said after the attack. “And I think it ought to be, whatever we assess what the cost we incur to be — plus, plus, plus. That’s how you reestablish deterrence.”
National World