The moon, Mars, or both? 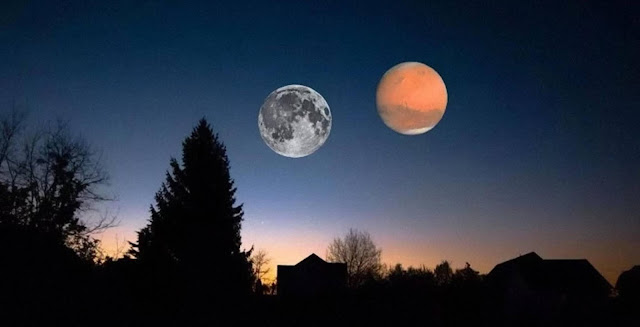 While 2020 has largely been a huge crap sandwich in many ways, it’s hard to deny that it’s been a very big year for space news. We saw astronauts ascending to the ISS from American soil in an American-made rocket for the first time in nearly a decade. And when he wasn’t sending people aloft, Elon Musk was launching literally hundreds of satellites, both his own and those of commercial customers, up into space. But both NASA and the private sector have had their eyes on bigger goals. There are ongoing plans to put people back on the moon in the next few years, but Mr. Musk has his eyes set on Mars.
Can we do both? Should we? That’s the question being asked and answered by David W. Brown at the Wall Street Journal this week. Brown argues that the moon is a target that was for a previous generation of pioneers. He sees Mars as a “grander, more fitting target” for our space program. But the dream of putting people on Mars has been alternately embraced and rejected by a succession of presidents. Both George H.W. Bush and his son George W. Bush embraced Mars as a target. Bill Clinton and Barack Obama nixed the idea in favor of goals that were closer to home. Donald Trump prefers the moon as a target, but NASA still claims Mars is on the menu.
Brown argues that doing either is a huge challenge in terms of the budget so it should be one or the other. And he clearly prefers Mars:
The moon’s great advantage, of course, is that it’s easier to reach and we’ve done it before. But for all the difficulties of landing on Mars and establishing a human presence there, it is clearly the superior prospect for sustainable exploration. Mars is a bona fide planet with air, ice, wind, weather and usable resources. It also has real similarities to Earth. A Mars day is just over 24 hours long. The planet, on average, is just 30 degrees colder than Antarctica. Its gravity is one-third that of Earth (versus the moon, which is about one-sixth). It has moons and its own complex geology, from the highest mountain in the solar system to a canyon network that makes the Grand Canyon seem a mere local attraction by comparison. It could be a home for people in a way that the moon never will.
The American space program has always aimed at putting people on Mars. Before the word astronaut had been coined or an agency named NASA existed, there was “Das Marsprojekt,” a work of speculative fiction written in 1948 by Wernher von Braun, who developed rocket technology for Nazi Germany before escaping to the arms of the American military. He built the rocket that would put Explorer 1, the first American satellite, in space and became the leading engineer and best-known promoter of the early U.S. space program.
While I’m a huge fan of space exploration, I’m always a bit more cautious about supporting manned missions as opposed to remote-controlled robotic efforts. While we are well-stocked with heroes willing to risk their lives in the cause of furthering science, those lives should never be wasted foolishly, and I would argue that a trip to Mars is still far beyond our capability of completing it safely and returning our astronauts back home in one piece.
Many of the things that Brown says about Mars are true. There is air there (after a fashion) and ice, weather and some resources. But that description paints an awfully rosy picture of a place that is much closer to being hell than heaven. The “air” on Mars is totally unbreathable, having no measurable levels of oxygen. And the air pressure on the surface is about six millibars. That’s barely one half of one percent of the pressure on Earth at sea level. It’s not a complete vacuum, but if you stepped out on the surface of the planet without a pressure suit and a suitable air supply, you would die of depressurization long before you died of asphyxiation. And while there are spots on Mars where the temperature gets up near 30 degrees during the day, it drops to hundreds of degrees below zero at night.
In other words, Mars isn’t really any more survivable than the moon unless you have technology keeping you alive. And if that technology fails and you are exposed to the environment there, it’s all over. The longer you stay away from the Earth and in an environment such as that, the greater the chances that your technology will eventually fail you. Even Elon Musk has admitted that the people who go on his planned excursion to Mars will almost undoubtedly never return to Earth alive.
It’s also worth keeping in mind that getting to and safely landing on the red planet isn’t exactly routine yet. Yes, we’ve had great results with quite a few rovers, but still, more than half of the missions sent to Mars have failed to stick the landing. And you only get one shot at it.
I’m all for going to Mars, but it just seems like it will have to be done in stages and the process will take far longer than some of the sunny projections we’re hearing. To do this in a smart way, robotic missions would need to land first, with plenty of supplies including oxygen, water, food, and everything else you would need to survive. A return vehicle would have to land there as well and remain operational and ready to use before the first astronauts ever leave the Earth. Even then the prospects are far from a sure thing.
I’m not saying we can’t do it. I think we can and I hope we do. But we have to be smart about it. And that’s going to take a long time and a staggering amount of money.
Opinion