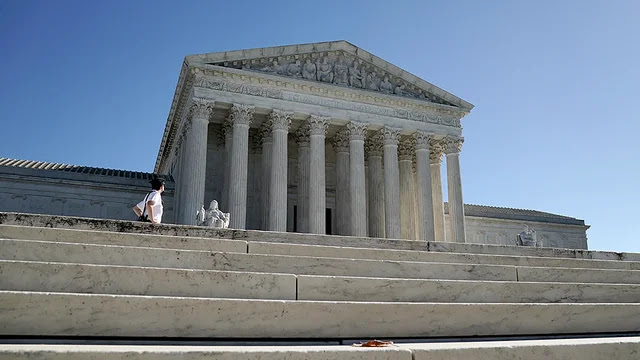 The U.S. Supreme Court on Thursday upheld the rape convictions of three male Air Force members, reversing a ruling from the military’s top court that dismissed their cases.
In an 8-0 decision regarding U.S. v Briggs, the country’s highest court ruled that a five-year statute of limitations does not apply to military rape prosecutions and convictions that occurred between 1986 and 2006.
The court in October heard the arguments in the case, which concerned how rape committed by U.S. service members is prosecuted and punished.
In 2014, Lt. Col. Michael Briggs was sentenced for the 2005 rape of a female service member.
But in a landmark 2018 decision, the Court of Appeals for the Armed Forces broke with precedent to rule that a five-year statute of limitations applied to military rape prosecutions. As a result, Briggs’ conviction was dismissed as were those of two other airmen, Lt. Col. Humphrey Daniels, who raped a woman in 1998, and Master Sgt. Richard Collins, who in 2000 raped an airman.
Up until then, the U.S. Military Code had no statute of limitations on rape claims.
Thursday’s ruling overturned the lower court’s decision, with the justices finding that the military code weighed “heavily in favor of the government’s interpretation” to prosecute rape claims going back to the 1980s.
“Today's opinion was a huge win for military rape survivors,” retired Air Force Col. Don Christensen, the president of Protect Our Defenders, an advocacy group for victims of sexual assault in the military, said in a statement.
“The unanimous nature of this opinion is a testament of just how wrong the lower court's opinion was. Justice has been restored for three survivors and hope has been restored for countless others.”
The newest court member, Justice Amy Coney Barrett, did not participate in the ruling. The case was argued in October, before she was confirmed and joined the bench.
National