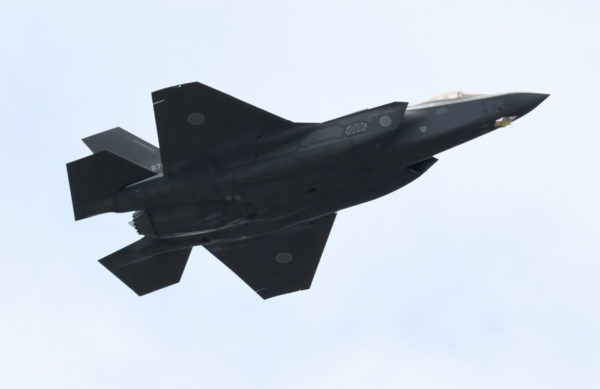 The Senate will vote next week on whether to block President Trump's arms sale to the United Arab Emirates, setting up a foreign policy showdown in the final days of the administration.
Sen. Bob Menendez (D-N.J.) said he expects to bring up the votes next week, which he is able to do without support from GOP leadership because of the rules governing arms sale resolutions.
“It’s ready, it has privilege on the floor. We are gathering support for it and I would think sometime next week,” Menendez said, asked about timing.
Sens. Menendez, Rand Paul (R-Ky.) and Chris Murphy (D-Conn.) introduced four resolutions of disapproval to block the $23 billion sale to the UAE of F-35 fighter jets, armed drones, missiles and bombs.
The administration notified Congress last month that it approved selling the UAE up to 50 F-35s worth $10.4 billion, up to 18 MQ-9B drones worth $2.97 billion and a package of air-to-air and air-to-ground munitions worth $10 billion.
Resolutions of disapproval on arms sales only need a simple majority to pass the Senate, unlike most legislation, and supporters are able to force them despite objections from leadership.
If every Democrat backs the resolutions, Democrats would need three GOP senators to get to 51 votes. Since Paul is a co-sponsor that means they would only need an additional two GOP senators.
It's unclear if every Democrat will support the resolution. Sen. Tim Kaine (D-Va.), a member of the Foreign Relations and Armed Services Committees, said on Thursday that he was undecided.
"I haven't decided yet. I've got some conversations about it over the weekend and into next week," Kaine said, describing himself as having unanswered questions.
Murphy, however, predicted that they would get to 51 votes, though he included the caveat that more senators need to get briefings on the arms sale. The administration has been providing closed-door briefings to people this week as it has tried to squash the resolutions.
"I do think we can get 51. I have not done a full vote count. I think our success will be somewhat dependent on every senator getting some version of the briefing we got. The briefing was stunning in that it was so crystal clear that they are rushing this through,” Murphy said.
The resolutions would still need to pass the House in order to make it to Trump’s desk, where he’s all but guaranteed to veto them.
Democrats have been able to pass previous resolutions to block arms sales under the Trump administration, though they've been unable so far to override a veto, meaning the sales have ultimately gone forward.
In 2019, Congress voted to block arms sales to Saudi Arabia and the UAE amid outrage over the death of Washington Post columnist Jamal Khashoggi. But there was not enough support to override Trump's vetoes. Seven Republicans voted for all or part of the resolutions blocking the arms sale at the time.
Sen. Marco Rubio (R-Fla.), who voted against the Saudi resolutions, characterized himself as undecided on whether to support the resolutions blocking the UAE arms sale.
"There are a couple other considerations, one being quantitative advantage for Israel, we want to make sure that’s maintained. And then, an additional concern that I’m not at liberty to discuss but that, you know, I need some answers to so we’re waiting for that," Rubio said.
Lawmakers have also been expressing concern about the sale eroding Israel’s military advantage in the region. The U.S. commitment to Israel’s so-called qualitative military edge is enshrined in a 2008 law.
Even if Congress isn’t able to ultimately block the sale, lawmakers say the incoming Biden administration may be able to make changes.
"There's no way that the sale can be completed before Biden takes office so no matter what happens, there's going to be ... some degree of discretion that the Biden administration will have on whether and how to carry out the sale," Murphy said.
National World