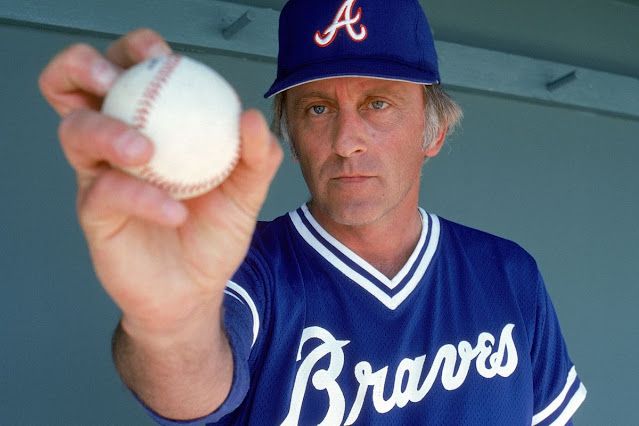 2020 has been a particularly horrendous year for losses to baseball’s great players, especially its elite pitchers. The game’s great and memorable losses include Tom Seaver, Bob Gibson, Whitey Ford, Joe Morgan, Lou Brock, Al Kaline, Jimmie Wynn, Dick Allen, Don Larsen, Bob Watson, Ron Perranoski, and Tony Fernandez. Add now the greatest of all knuckleballers, Phil Niekro, who died Saturday at age 81.
Hard as it is to say of a man who won 318 major league games, finished in the top five in the Cy Young balloting three times, and was elected to the Hall of Fame, Niekro was one of the game’s truly underrated pitchers. He had many of his best years pitching for terrible Braves teams in the 1970s, when Fulton County Stadium was such a home-run haven it was nicknamed “the Launching Pad.” His career ERA was 3.51 at home, 3.20 on the road. He had ERAs below 3.00 seven times at home, the last time in 1974, but ten times on the road, including seven of the ten years between 1973–82. He won his first major league game at 26, and his seventh at 28, but it wasn’t just the knuckleball that slowed the start of his epic career; Niekro spent a year in the military when he was 24. The modern Wins Above Replacement (WAR) metric ranks him eleventh among all pitchers, with 97 career WAR, ahead of most of his contemporaries (Nolan Ryan, Steve Carlton, Gaylord Perry, Bert Blyleven, Fergie Jenkins, Don Sutton, Jim Palmer — everybody but Seaver) and ahead of Gibson and Warren Spahn. From 1974–79, age 35–40, he averaged 7.9 WAR, 18 wins, and a park/league adjusted ERA+ of 125, meaning he was 25 percent better than the average pitcher. In 1982, when the Braves won the division by one game over the Dodgers and two over the Giants, Niekro’s only two shutouts were his last two starts — one of them against the Giants.
Niekro’s great virtue as a workhorse was often underappreciated, but it made him especially valuable to pitching-strapped Braves teams. He averaged 295 innings a year from age 32–40. He started 129 games and faced 4253 batters from age 38–40, a staggering total; for those three seasons, he averaged 336 innings, 43 starts, and 22 complete games. I did a project some years back on starting pitcher workloads relative to their leagues, comparing each pitcher’s innings to a baseline of the top four rotation starters on each team across that season. Only four other great pitchers stood out against their contemporaries the way Niekro did — John Clarkson in the 1880s, Ed Walsh in the 1900s, Bob Feller in the 1940s, and Robin Roberts in the 1950s — and Niekro in the late 1970s stood out the furthest of all. His mastery of the darting, elusive knuckleball, baseball’s strangest gimmick and most challenging art to learn, was crucial to his ability to stay in harness so often and so long well into his 40s, long after his hair had gone gray. At 46, he was eighth in the American League in strikeouts per nine innings.
Niekro was also remembered around the game as a genial gentleman. R.I.P.
Opinion