Republicans fear rift in Georgia GOP amid attacks from Trump 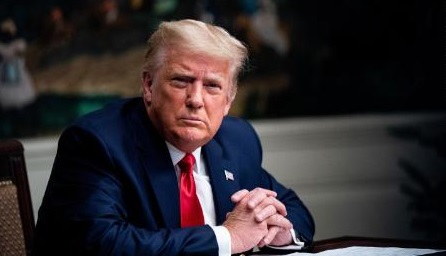 President Trump’s criticism of Georgia officials over the handling of the presidential election results is sparking concerns among Republicans that he could be dividing the state’s GOP ahead of two crucial Senate runoffs in January.
The president started Monday lambasting the state’s Republican governor, Brian Kemp, saying he should overrule Georgia Secretary of State Brad Raffensperger after the state certified President-elect Joe Biden as the winner of the race.
“Why won’t Governor [Brian Kemp], the hapless Governor of Georgia, use his emergency powers, which can be easily done, to overrule his obstinate Secretary of State, and do a match of signatures on envelopes. It will be a ‘goldmine’ of fraud, and we will easily WIN the state,” Trump tweeted.
The president is set to campaign for incumbent Sens. Kelly Loeffler (R-Ga.) and David Perdue (R-Ga.) in the Peach State on Saturday and is urging supporters to not boycott the races, which will determine the balance of power in the Senate.
“No, the 2020 Election was a total scam, we won by a lot (and will hopefully turn over the fraudulent result), but we must get out and help David and Kelly, two GREAT people,” Trump tweeted in response to a Newsmax story reporting the president’s supporters were considering boycotting the race amid fraud claims.
“Otherwise we are playing right into the hands of some very sick people. I will be in Georgia on Saturday!” he added.
The dynamic has presented a picture of infighting among Georgia’s Republicans ahead of two of the most important Senate races the state has seen in years.
“We’re clearly, just to put it mildly, in uncharted political waters here,” said Chuck Clay, a former state GOP chairman and current attorney at Hall Booth Smith. “If Trump is going to have a political legacy in Washington, D.C., he’s got to win these two Senate seats.”
Of chief concern to many GOP operatives is that Trump’s continued attacks on Georgia’s elections system — and mail-in voting, in particular — may serve to discourage Republicans from using a voting method that helped propel Biden to victory in the state in November.
Raffensperger has said as much himself, noting last month that some 24,000 Republicans who voted absentee in the state’s June primary did not cast a ballot in the general election, a difference that would have been more than enough to hand Trump a win in Georgia.
“They did not vote absentee, because they were told by the president ‘Do not vote absentee, it’s not secure.’ But then they did not come out and vote in person,” Raffensperger said in an interview with WSB-TV in Atlanta. “He would have won by 10,000 votes. He actually depressed, suppressed his own voting base.”
One Republican operative based in Georgia said that many of the party’s voters are still reluctant to cast their ballots by mail, especially given the president’s claims of widespread fraud and irregularities associated with mail voting in the general election.
“It’s not helpful for him to keep saying ‘Oh, the process is rigged,’ because it just discourages people from taking advantage of absentee,” the operative said. “Clearly, the Democratic campaign from the [Democratic National Committee] down has really been one strategy, one size fits all, which is register people to vote and get a mail ballot in every single person’s hand.”
Still, Republicans see a few reasons to be optimistic about their chances in the runoff. They say that their voters are more likely to vote early in person or on Jan. 5, while Democrats are working on a shortened timeline to get mail ballots to their supporters.
“The problem the Democrats have for an [absentee by] mail program is they don’t have the lead time they had in the general, plus there’s the hurdle of the holidays,” said Jay Williams, a longtime Georgia Republican strategist. “If you see Republicans tracking with Democrats in AB mail, then they’re probably in good shape.”
But many Republicans have expressed optimism ahead of the runoffs, saying Trump’s influence will energize the party’s base.
“Trump is still the magic word,” Clay said. “One could say that this president by endorsing Brian Kemp was, if not the sole reason, a significant factor in what became an absolute runaway election.”
In-state and out-of-state Republicans are pouring money into Georgia in an effort to defend the upper chamber. Republicans have already outspent Democrats in the opening days of the runoff campaign, doling out $163 million in advertisements.
Politico reported Monday that Save the U.S. Senate PAC, which was started by advisers to Donald Trump Jr., will begin airing ads featuring Trump Jr. on conservative radio and TV stations in the state this week.
Kemp’s office has responded to Trump’s recent comments, saying his position prohibits him from interfering in elections.
“Georgia law prohibits the governor from interfering in elections. The Secretary of State, who is an elected constitutional officer, has oversight over elections that cannot be overridden by executive order,” the governor’s spokesman Cody Hall told the Atlanta Journal-Constitution on Monday.
“As the governor has said repeatedly, he will continue to follow the law and encourage the Secretary of State to take reasonable steps — including a sample audit of signatures — to restore trust and address serious issues that have been raised,” he continued.
Kemp has received little to no support from Georgia Republicans, including Loeffler and Perdue. The situation could stand to impact the governor’s 2022 reelection hopes, with speculation growing over a primary challenge. In a sign of coming political trouble for the Georgia governor, Trump told Fox News on Sunday that he was “ashamed” to have endorsed Kemp during his 2018 gubernatorial bid.
But for now, Republicans are more concerned about what could unfold in the next month.
“What harms us is the lack of a unified message, where their side is going to have a very unified message,” a different GOP operative in Georgia said. “It gives them a pathway to win if their side is completely unified and our side and fractured and fighting.”
National