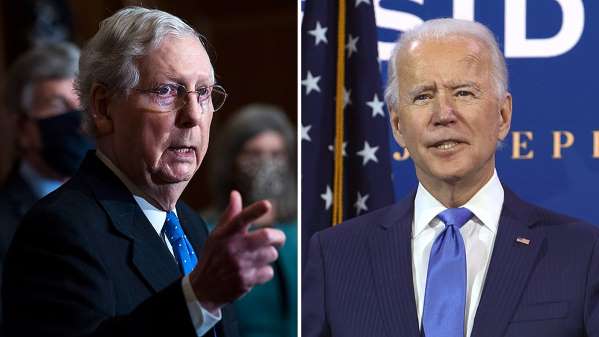 A fight is brewing over Joe Biden’s Cabinet picks, in one of the first faceoffs between the long-time Democrat and Senate Republicans.
Tensions are building on various fronts, from complaints that Biden’s team isn’t coordinating with Senate Republicans to warnings that he should expect a slower pace of confirmation after years-long frustrations from GOP senators about the treatment of President Trump’s nominees.
Biden will need GOP buy-in to ensure confirmation of his picks unless Democrats sweep the two Georgia runoff elections next month.
“I really am a little surprised that there hadn’t been at least some consultation. I mean, some of these problems can be avoided and people, you know, saved from the embarrassment if there would simply be some consultation on who they’re thinking about,” said Sen. John Cornyn (R-Texas), an adviser to Senate Majority Leader Mitch McConnell (R-Ky.).
Asked about consulting with Republicans, Sen. Kevin Cramer (R-N.D.) said, “Unless you’re putting all your eggs in the ‘We’re going to win them both in Georgia’ basket, that would be a wise thing to do.”
Sen. Mike Rounds (R-S.D.) added that while there was still time for Biden to do outreach, he should keep in mind the views of Republicans who will be wary of anything that will “obliterate” work done under the Trump administration.
As Biden is “attempting to lay out people that he thinks should be part of his Cabinet, we hope that he takes that into consideration,” Rounds said.
McConnell still hasn’t directly acknowledged Biden as the president-elect, and the former vice president disclosed on Tuesday that he hadn’t spoken with the Senate GOP leader following the election. The two have a decades-long relationship and served together in the Senate, but any overtures between them have been on ice since Nov. 3.
Cornyn predicted Republicans would be open to “reasonable” nominees. But, he added, the onus was on Biden’s team to reach out to McConnell.
Nominations, once largely drama-free, have emerged as lightning rods in the Senate. Democrats changed the rules in 2013 to allow all executive branch picks, and most judicial nominees, to get confirmed with a simple majority. And under a rules change in 2019 by Senate Republicans, most nominations now only require two hours of debate after overcoming a procedural hurdle on the floor, though most Cabinet picks could still face up to 30 hours of additional debate.
Republicans were frustrated in 2017 when Democrats agreed to let just two of Trump’s Cabinet picks be confirmed on the first day of his administration, compared to six for then-President Obama and seven for then-President George W. Bush. By Feb. 10, Trump had seven confirmed nominees compared to Obama’s 12 and Bush’s 14, which was his entire Cabinet.
Democrats are ramping up pressure to quickly confirm Biden’s Cabinet picks, including holding hearings before Inauguration Day.
“Republican senators often argued that a president deserves broad deference when it comes to their Cabinet and official appointments and blew past controversies that would in almost any other time be disqualifying. President-elect Biden’s nominees, of course, are in a different universe,” Schumer said.
“Well, we’re already starting to see the switch flip now that President-elect Biden is naming the names,” Schumer added.
But Republicans, pointing back to 2017, warn that Democrats should expect delays in getting at least some of Biden’s picks through the Senate if they keep control of the majority after the Jan. 5 runoffs.
“I don’t think there’s going to be a great big hurry to confirm a whole lot of individuals right away. ... It’s an advice and consent–type issue with the Senate, particularly when you’re from different parties,” Rounds said.
Cramer said that when it comes to nominations, Democrats have “made this bed. They may end up sleeping in it.”
“If we have the majority any one of us can put a hold on somebody. And if we honor that, that’s a pretty big problem for him,” Cramer said.
Battle lines are already being drawn on key picks like Neera Tanden for director of the Office of Management and Budget and Antony Blinken for secretary of State. Biden has yet to name his picks for more politically controversial agencies like the Department of Health and Human Services, the Environmental Protection Agency and the Consumer Financial Protection Bureau.
Cornyn called Tanden “radioactive.” Sens. Rob Portman (R-Ohio) and Lindsey Graham (R-S.C.), who will oversee the two committees with joint oversight of Tanden’s nomination, haven’t committed to giving her a confirmation hearing.
Blinken, a longtime member of the foreign policy establishment, is coming under scrutiny because of his role at WestExec Advisors, a consultancy firm whose clients remain opaque. Senate Foreign Relations Committee Chairman James Risch (R-Idaho) has brushed off questions from reporters this week about Blinken and about Biden’s other national security picks.
Sen. Ron Johnson (R-Wis.) wanted to talk to Blinken as part of his investigation into the Bidens — an issue he hinted could come up during Blinken’s confirmation process unless he agrees to an interview with Johnson’s Homeland Security and Governmental Affairs Committee staff beforehand.
Johnson also didn’t rule out that he could keep trying to speak with Blinken as part of the probe even if he’s confirmed as secretary of State. Though Johnson is handing over the committee gavel, he’s expected to be chairman of the panel’s Permanent Subcommittee on Investigations.
“It’s probably important for him to sit down and talk to us now. He’s got some answers that he needs to provide us with,” Johnson said, adding that he’s “not really happy” with Blinken.
Even as some GOP senators are sending warning signs over the looming confirmation fights, several have said that as long as Biden’s picks are within the “mainstream,” Republicans would help confirm them.
Graham said he thought there would be “a willingness by a lot of us” to help confirm Cabinet picks for individuals who are “competent, qualified, not over the top.”
Pressed if he thought any of his GOP colleagues would use the rules to drag out or delay Biden’s picks, Graham demurred, adding: “Time will tell.”
National