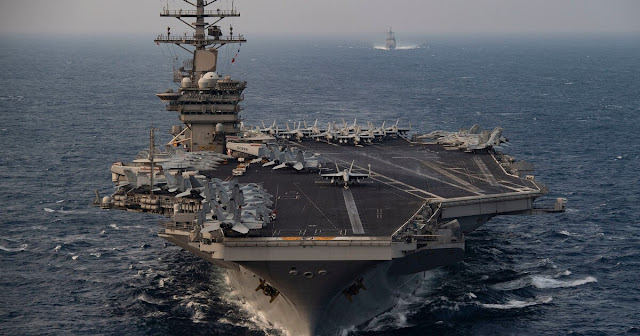 The U.S. military on Monday acknowledged that it had moved the aircraft carrier USS Nimitz off the coast of Somalia as it prepares to transfer nearly all American troops from the country to other parts of Africa.
The Nimitz Carrier Strike Group since Dec. 21 “has been providing operational and close air support to Joint Task Force – Quartz,” the group in charge of repositioning forces from Somalia to other east Africa locations, according to a Navy statement.
The strike group — which includes more than 80 combat aircraft, two guided-missile cruisers and a guided missile destroyer — was sent in addition to a Marine expeditionary unit made up of nearly 5,000 sailors and Marines.
USNI News first reported earlier this month that the Nimitz was sent to the region.
The beefing up of forces in the waters around Somalia comes after the Trump administration earlier this month ordered the withdrawal of most of the roughly 700 service members stationed in the country by the end of January.
U.S. forces have been stationed in the country for more than 10 years to help local forces quell extremist groups including al Qaeda affiliate al-Shabaab and, more recently, ISIS militants in the region. American troops have trained and assisted local security forces and also conducted airstrikes.
Despite the pullout, U.S. Africa Command head Gen. Stephen Townsend said earlier this month that the United States “is not withdrawing or disengaging from East Africa,” and that a small troop presence would remain.
He added that Washington remains “committed to helping our African partners build a more secure future,” and that American troops “remain capable of striking al-Shabaab at the time and place of our choosing — they should not test us.”
National World