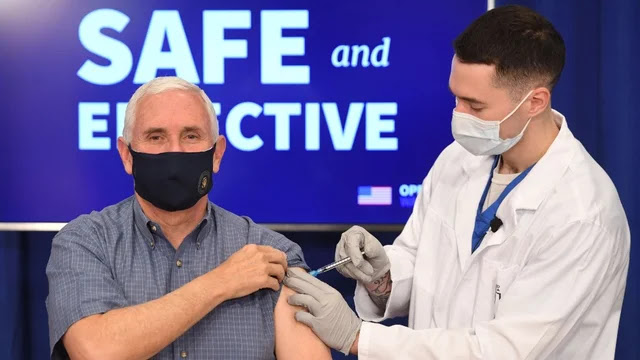 Vice President Mike Pence on Friday received the coronavirus vaccine on live television, making him the first White House official to do so.
Pence, the leader of the White House coronavirus task force, received the vaccine produced by Pfizer and BioNTech a week after it was approved in a major milestone in the battle against the coronavirus. He did so publicly, at an event in the White House Friday morning, in order to help build public confidence in the vaccine and assure Americans of its safety and efficacy.
“We gather here today at the end of a historic week to affirm to the American people that hope is on the way,” Pence said in remarks after receiving the vaccine, assuring the public that while the officials “cut red tape” to quickly produce the vaccine they “cut no corners.”
Second lady Karen Pence and U.S. Surgeon General Jerome Adams also received doses at the event on Friday. Medical technicians from Walter Reed National Military Medical Center administered the vaccine. The officials sat in front of television screens that read “Safe and Effective” and “Operation Warp Speed,” the Trump administration’s vaccine program.
Pence in his remarks said he “didn’t feel a thing” and commended the medical professionals for their work. He described the week as the “beginning of the end of the coronavirus pandemic” but said that the country nevertheless has a “ways to go,” acknowledging the current rising cases and hospitalizations across the country amid the holiday season.
“Vigilance and the vaccine is our way through, and building confidence in the vaccine is what brings us here this morning,” Pence said.
Dr. Anthony Fauci, the top U.S. infectious disease expert and a member of the task force, delivered brief remarks to dispel concerns about the government moving too quickly on the vaccine and urged Americans who are eligible to receive it.
“Over a period of months as opposed to years, we saw the development in record time of a vaccine that is shown to be safe and effective,” Fauci said. “We want virtually everyone eligible to get the vaccine.”
The vaccine program has been a bright point in the Trump administration’s otherwise widely criticized response to the virus. President Trump, who was not on hand for Friday’s event, has been scrutinized for his rhetoric downplaying the threat from the virus and his decision to hold large gatherings at the White House and on the campaign trail throughout the pandemic.
Pence invoked Trump a handful of times on Friday, repeating Trump’s phrase that the U.S. is “rounding the corner” on the virus as vaccines are distributed across the country.
“We are rounding the corner. We can see the light at the end of the tunnel,” Pence said. “After a year of heartbreak and hardship, the American people can be encouraged.”
The Food and Drug Administration (FDA) is poised to give emergency use authorization to a vaccine produced by Moderna, after an expert panel endorsed it on Thursday.
States are responsible for deciding which Americans receive the vaccine first, and the Centers for Disease Control and Prevention (CDC) has recommended that officials prioritize healthcare workers and residents of long-term care facilities. Officials have anticipated that the general public will not begin receiving the vaccine until at least the springtime.
It is unclear when and how Trump will receive the vaccine, though he has indicated he plans to receive it. White House press secretary Kayleigh McEnany told reporters earlier this week that he was following the advice of his doctors. Trump was diagnosed with and recovered from the coronavirus in October.
President-elect Joe Biden, who will take office in just over a month and will take control of the coronavirus response, plans to receive the vaccine publicly as soon as next week. Former presidents from both parties have also pledged to receive the vaccine in public in order to build confidence in it.
National