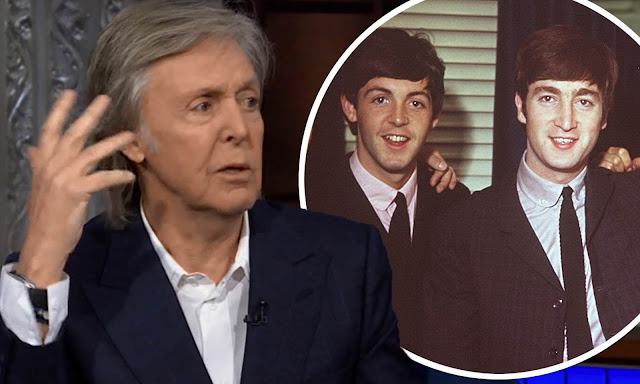 Paul McCartney has put together a new album on which, for the third time, he plays all of the instruments.
After McCartney (1970) and McCartney II (1980), Paul’s lockdown album, out this week, is McCartney III, made alone in a studio except for two tech aides. “I’m actually quite good at playing bass,” He explained in an appearance on Howard Stern’s SiriusXM show this morning. McCartney recalls that when he was a boy he would sometimes mention that he wrote songs but no one expressed any interest until he met John Lennon. “Someone’s interested at last,” he remembers thinking.
McCartney knew Lennon before Lennon was aware: The latter cut a figure on the Liverpool bus lines with his swept-back hair and his hip aura, and McCartney wanted to meet him, though “I wasn’t that impressed because he smelt of beer,” he said. McCartney ranked the best rock drummers (No. 1. Ringo Starr, No. 2. John Bonham, No. 3. Keith Moon). He once warned Bonham he was overindulging in various substances including cocaine: “I remember saying to him, just pull it in a bit, you know.” But he said neither Bonham nor Moon tended to go too far around him.
Late in the Beatles’ history, Stern said, McCartney was in effect the “schoolteacher” who took it upon himself to push the others into the recording studio. McCartney agreed: “It was okay until they started to resent it. . . . I mean they kind of liked it but there was a point where they just got fed up with me. But hey, Howard, it all worked out. Did it not?”
McCartney said a famous phrase came to him on a plane where he heard a passenger (Beatles roadie Mal Evans) say, “Salt and pepper.” McCartney: “I thought he said ‘Sgt. Pepper.’” Stern reminded him of a story McCartney had evidently forgotten. Elton John told Stern that he was in the same studio with McCartney when Paul said something like this: “Hey guys, I’ve just written this, what do you think?” and played “Hey Jude.” According to Stern, John said this was “the most intimidating thing ever.”
McCartney also said he always says, “Hey, John,” meaning Lennon, whenever he walks by the funeral home where Lennon’s body was laid out in 1980. (That’s the Frank E. Campbell Funeral Home on Madison Avenue. McCartney has an apartment on Fifth Avenue.)
Opinion