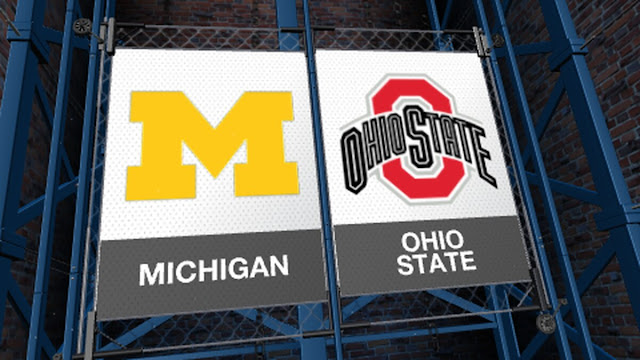 The annual matchup between Big Ten rivals Ohio State and Michigan was cancelled for the first time in 100 years on Tuesday, with officials citing an outbreak of COVID-19 among Michigan coaching staff and players as the reason.
The game is typically one of the most-watched college football games of the season. Michigan officials said in a statement obtained by ESPN that the decision had been made after consultations with university administrators and state health department officials.
"The number of positive tests has continued to trend in an upward direction over the last seven days," the university's athletic director, Warde Manuel, said, according to the outlet. "We have not been cleared to participate in practice at this time. Unfortunately, we will not be able to field a team due to COVID-19 positives and the associated quarantining required of close contact individuals."
"This decision is disappointing for our team and coaches, but their health and safety is paramount, and it will always come first in our decision-making," he said.
Tuesday's cancellation comes just days after Michigan had previously been scheduled to play the University of Maryland-College Park, which was also cancelled due to Michigan's COVID-19 outbreak. 2020 will be the first year Ohio State and Michigan haven't played each other since 1918.
It's unclear exactly how many players and coaching staff members have contracted the virus, but the Detroit Free Press reported that the cases had climbed past a dozen.
"I just think we have to take a hard look periodically at all this stuff and this is one of those situations," said Ryan Day, coach of the Ohio State Buckeyes, according to ESPN. "If we don't quite get the game we need to get in the championship game, I think that needs to be looked at hard, just like anybody else in the conference. There's no easy solution in times like this.
"I know those guys are going to come together and take a hard look at it and make sure it was the right decision," Day said.
National