New York Times: Nothing to see here about Swalwell and his spy lover 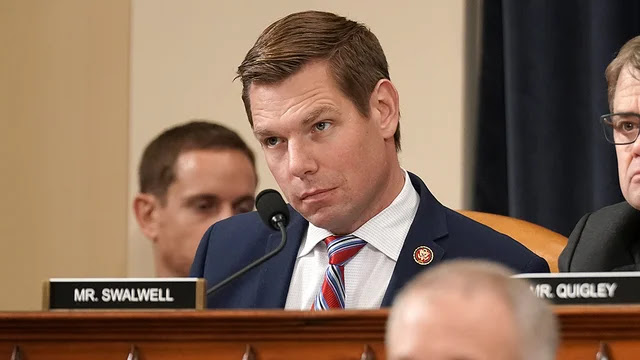 If you're a New York Times subscriber who also watches the broadcast network evening news and considers that your news diet, there's a very good chance you haven't heard about Rep. Eric Swalwell (D-Calif.) and his ties to an accused Chinese spy a few years ago.
To review why this is absolutely worthy of coverage, Swalwell’s interaction with the alleged spy known as Fang Fang included, according to Axios, Fang placing an intern in Swalwell's office and helping to fundraise for his 2014 reelection campaign. In 2015, the FBI provided Swalwell a "defensive briefing" to warn him of the threat she appeared to pose.
So, the first obvious question is this: Given how easily Swalwell was duped, why did House Speaker Nancy Pelosi (D-Calif.) shortly thereafter place him on the House Intelligence Committee, which oversees the CIA and therefore has access to the highest level of sensitive, classified information?
The New York Times doesn't seem to care about getting an answer to that question.
Of the biases we see in major media, the sin of omission is one that seems to occur only when the protagonist of a major story has a (D) next to his or her name. So, when the New York Times, which has a whopping 7 million subscribers and is considered the country's most influential publication, doesn't see the Swalwell story as a story at all, it tells you just as much about its moral compass as it does its editorial decisions.
Swalwell isn't just a random lawmaker. He's arguably the most ubiquitous D.C. figure on cable news – and particularly CNN and MSNBC – this side of Rep. Adam Schiff (D-Calif.) in conducting hundreds of interviews over the past four years, primarily to charge without evidence that President Trump is an agent of Russia. The 40-year-old also somehow sits on the House Intelligence Committee, meaning he has access to the nation's top classified information.
The Swalwell/Chinese spy story was broken 10 days ago by Axios, which isn't exactly a bastion of right-wing sentiment. No matter: Swalwell decided to allege that Axios had colluded with Trump in terms of how the story came to light.
"I’ve been a critic of the president. I’ve spoken out against him. I was on both committees that worked to impeach him. The timing feels like that should be looked at," Swalwell claimed on Dec. 9. Yep — Eric Swalwell, who ran for president for about five minutes in 2019, is such a threat to an outgoing president that a decision was made to work with Axios (which worked on the story for more than a year) to run with a Trump leak.
This is the same lawmaker who told MSNBC that Trump "is working on behalf of the Russians" and used his position on the Intel Committee to imply that he had evidence to back up such information. That evidence has yet to be presented, because it doesn't exist.
So, an obvious question is whether Swalwell should remain on the Intelligence Committee given the Chinese connection and the reckless statements about a sitting president working with a hostile nation. More than a dozen GOP House members are urging Speaker Pelosi to oust Swalwell from the committee; Pelosi has responded by saying she doesn't have "any concerns" about the congressman.
Again, are growing calls for a member of a very important committee worthy of a few drops of ink in the Times?
One would think.
Swalwell himself has barely answered any questions on the matter because very few are inquiring about it. The CBS, NBC and ABC evening newscasts haven't dedicated one second to the story, which undoubtedly would be a much different story if a young Republican lawmaker such as Rep. Matt Gaetz (R-Fla.) or Dan Crenshaw (R-Texas) were involved.
Swalwell did one interview on the matter on Dec. 9 with CNN anchor Jim Scuitto, where the allegation of Axios-Trump collusion was made.
Former CNN producer Steve Krakauer, now the author of the smart nightly media newsletter "Fourth Watch," pointed out why Swalwell chose this particular anchor at this particular time for a 3-minute, 16-second interview.
"When Swalwell was asked about it during a CNN appearance last week, he offered a general denial of wrongdoing and was barely pressed by host Jim Sciutto. What was not disclosed by Sciutto during this interview was what Scuitto's job was before he joined CNN in 2013." Krakauer writes. "He previously spent two years in the Obama administration as the Chief of Staff to the U.S. Ambassador to China Gary Locke, in Beijing. This occurred during the same time the China spy in the Axios story was making her way through the U.S."
In the end, the best bet is that Swalwell will do what is increasingly a popular strategy when Democratic public figures find themselves in trouble: Briefly address the issue with a friendly outlet then hope a chaotic news cycle washes away the story as it gets ignored by enough outlets — and move on.
Nice deal, if you can get it.
New York Times associate managing editor Cliff Levy recently declared the following after the 2020 presidential election: “Core to the @nytimes mission: We will scrutinize the incoming administration just as thoroughly as we did the outgoing one."
Given the Swalwell blackout, does anyone actually believe this?
Opinion