New York Post calls on Trump to 'stop the insanity' 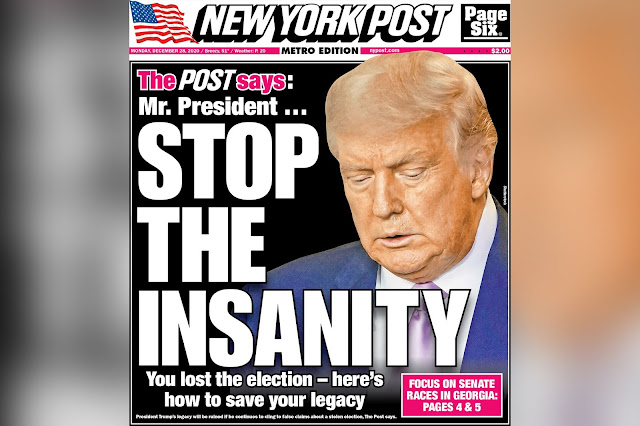 The New York Post’s editorial board called on President Trump to “start thinking” about the Georgia runoff races and to “stop thinking” about overturning the election results.
The Post promoted its editorial board’s piece, which pleaded with the president to “end this dark charade” of “cheering for an undemocratic coup” to change the 2020 election results, on the front page of its Monday paper.
The newspaper’s editorial board labeled the Georgia Senate runoff election “an enormously important moment for the next four years of our country,” as the races will determine which party controls the U.S. Senate.
Addressing Trump, the editorial board wrote, “Unfortunately, you’re obsessed with the next day, Jan. 6, when Congress will, in a pro forma action, certify the Electoral College vote.”
The Post noted that the president “had every right to investigate the election” but added, “Let’s be clear: Those efforts have found nothing.”
“We understand, Mr. President, that you’re angry that you lost. But to continue down this road is ruinous,” the editorial board wrote. “We offer this as a newspaper that endorsed you, that supported you: If you want to cement your influence, even set the stage for a future return, you must channel your fury into something more productive.”
“Stop thinking about Jan. 6. Start thinking about Jan. 5,” it added.
The editorial board encouraged Trump to expend his resources in the Senate race to preserve his accomplishments and prevent the Democrats from having the presidency, the House and the Senate.
“Securing the Senate means securing your legacy,” the editorial board wrote. “You should use your considerable charm and influence to support the Georgia candidates, mobilizing your voters for them. Focus on their success, not your own grievances, as we head into the final week.”
“If you insist on spending your final days in office threatening to burn it all down, that will be how you are remembered,” it concluded. “Not as a revolutionary, but as the anarchist holding the match.”
President-elect Joe Biden has been recognized as the winner of the 2020 election for nearly two months, but Trump has refused to concede to him. The Electoral College certified Biden’s victory earlier this month, and Congress’s certification of the vote is the last step before Inauguration Day.
The president instead has promoted claims that widespread voter fraud led to Biden’s win without presenting supporting evidence. His campaign filed several lawsuits challenging the vote in battleground states that were unsuccessful.
The editorial board’s article came hours after the president tweeted, “See you in Washington, DC, on January 6th. Don’t miss it. Information to follow!”
Sens. Kelly Loeffler (R-Ga.) and David Perdue (R-Ga.) are running to keep their Senate seats against Democratic contenders Raphael Warnock and Jon Ossoff. The races moved to runoffs after no candidate in either race earned a majority of votes in November.
If either Republican wins, the GOP will retain control of the Senate. But if both Democrats win, the Senate will be split 50-50 with Vice President-elect Kamala Harris becoming the tie-breaking vote.
National