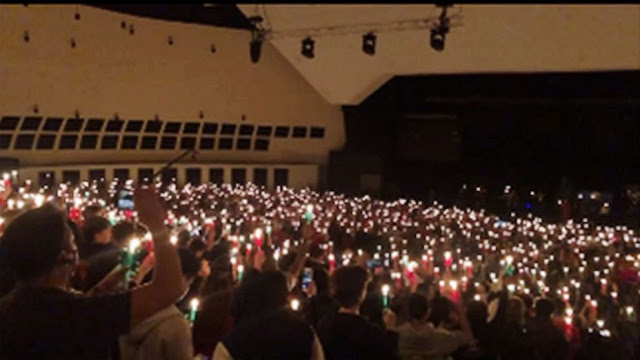 New Mexico officials fined two megachurches $10,000 each after they hosted packed Christmas Eve services last week.
Legacy Church and Calvary Church in Albuquerque, N.M., were shown in photos on the church’s Instagram accounts to have held services with large crowds of people, many of whom were not wearing masks, city station KOB 4 and ABC affiliate KOAT reported.
The packed services were held despite state restrictions instituted Dec. 15 that limit worship services to 25 percent capacity and require masks. Each violation amounted to a $5,000 fine.
New Mexico Gov. Michelle Lujan Grisham condemned the churches, saying they violated “the state public health order and common sense” in a statement obtained by NBC News.
"These two churches and their leaders endangered the lives, livelihoods and health of not only their parishioners but their entire communities — and, given how quickly this virus can spread, potentially our state as a whole," she said.
"These illegal and selfish gatherings will directly contribute to more suffering and illness in our state,” she added. “These church leaders should reflect on the danger they’ve unleashed in their communities."
Legacy Church told NBC News on Wednesday that state officials overstepped “their constitutional authority” and were countering “what we are called on by God to do.”
"It's tragic that what we do for thousands of shut-ins, those in despair, and kids who go without meals gets no state notice, but fixation on one service can net us large fines," the statement read.
Legacy Church filed a lawsuit against the state earlier this year after Grisham limited gatherings at places of worship, but the lawsuit was dismissed in July, according to KOB 4.
The other church, Calvary Church, told the local networks that the house of worship “chose not to break fellowship with any worshiper by requiring them to leave the gathering of their church family.”
“Instead, we continued to urge and provide opportunity for our congregants to maintain safe social distance, wear face coverings, and properly sanitize,” the statement continued.
New Mexico has confirmed 141,186 COVID-19 cases, 9,614 hospitalizations and 2,436 fatalities throughout the pandemic, according to state data.
Johns Hopkins University data indicates that over the past week New Mexico has recorded an about 8.25 percent positive rate, higher than the recommended 5 percent but better than most states in the country.
National